Claude Rives of Shreveport, La., attended a 1986 Ole Miss-LSU football game and, though he had graduated from Regis University in Denver, Colo., he instantly became a Rebel fan. 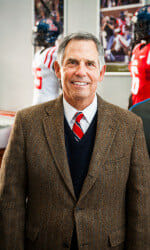 “What I loved about Ole Miss right from the beginning was the spirit,” recalls Rives. “We might not have had the facilities, equipment or support that other teams had, but that was no excuse for not winning. The philosophy was, `Why not?’ I loved that.”

Rives made many subsequent visits to the Oxford campus during his son Christopher’s enrollment at Ole Miss. He fell in love with the spirit and culture that surrounds Ole Miss. Even after his son’s graduation in 1999, Rives continued to increase his involvement in Ole Miss.

After his retirement in 2006, Rives bought a second home and has immersed himself in the Oxford-University community ever since. He’s an avid football fan, but he’s also frequently on the sidelines cheering for Ole Miss student-athletes in volleyball, tennis, basketball and baseball.

Rives recently contributed a major gift to the Vaught Society/Forward Together campaign – a gift that has added to his other generous support to Ole Miss Athletics. He is also a life member of the Ole Miss Alumni Association.

In a statement that perhaps reflects his days as an investment advisor with Merrill Lynch, Rives says, “I believe in giving money to organizations when I know the money is being spent wisely, prudently and for the right reasons.”

“There’s a new movement afoot,” he said. “We have modern leadership that understands today’s requirements for the success of a big-time program: to bring in the best people and the best athletes. I want this money to provide facilities, assistance and services and be a part of accomplishing the vision and goals that are beginning to take shape.”

“I want Ole Miss to be competitive in all sports and have the hope to be champions in any sport,” he continued. “Through the vision of the administration, we now have the beginning of a program that will allow us to really be able to ask, `Why not?’ and mean it.”

Keith Carter, senior associate athletics director for development and executive director of the Ole Miss Athletics Foundation, says the university is indebted to Rives and to all those who support the ongoing Vaught Society/Forward Together campaign, which has as a goal attracting $150 million in support. Thus far, more than $130 million has been committed during the ambitious initiative that includes a new basketball arena and expansion of Vaught-Hemingway Stadium.

“We have a responsibility to be good stewards of the generous donation that Claude has made to this program and we are going to honor that gift with each decision we make,” Carter said. “Claude is right: We have a vision for this program and that is to build it from the ground up on a foundation of excellence. And that excellence begins with the crucial financial support we receive from Claude Rives and other loyal fans. That’s what the Forward Together campaign is all about.”

“I love sports, but I also believe in the whole academic environment,” he said. “I’ve taken courses here. I love history. I’ve taken literary and poetry workshops, and I’m a member of the Friends of the University Museum.”

His son Christopher, class of 1999 and his wife, Brooke, class of 2000, have two children and live in Houston, Texas. Rives’ older son, Chip, and his wife Reagan (both graduates of the University of Texas) live in Austin, Texas, and have three children.

“Jodi and I both have a love for Oxford,” Rives said, referring to his wife, whom he recently married. Both of Jodi’s daughters are graduates of Ole Miss.

“Oxford offers great restaurants, the arts and a university where I can go to school, take courses and meet new people.” He added, laughing, “What’s fun is when a college kid comes up to me on campus and says, `Hey Claude, how you doing? How’d you do in that history course we had last year?’ Oxford and Ole Miss have given me so much in terms of friendship and access to being a part of all of this. I just want to give back in accordance to what the university has given me.”

To learn more about the Vaught Society/Forward Together campaign, visit Forward Rebels Together; contact Keith Carter at jkcarter@olemiss.edu or call 662-915-7159.