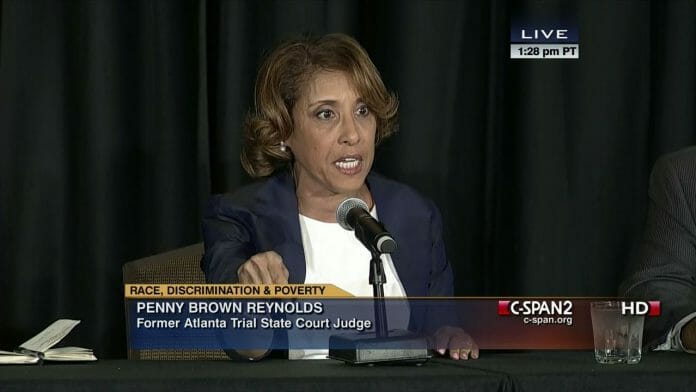 With a forceful voice and equally expressive demeanor, Judge Penny Brown Reynolds pushed the theme of her speech, The Time is Now, to a riveting call to service.

The noted real life judge who also is TV’s Judge Penny, came to speak to Jackson during the Alpha Kappa Alpha Sorority, Inc. / Rho Lambda Omega Chapter Founder’s Day Observance on January 10 at a local church.  Alpha Kappa Alpha Sorority, Incorporated- the first African American Greek-letter sorority- was founded in 1908 by nine college women at Howard University.  Today, it has more than 280,000 college-educated members worldwide. In keeping with the organization’s tradition of recognizing commendable community service, 12 pastors’ wives were honored at the event.

“So many people keep trying to reduce Dr. King to a dreamer,” she told the audience of mostly sorority women.  “The call is service. Dr. King said everybody can be great because everybody can serve. Service does not require a degree, nor does it require good grammar – just a willingness to help.”

The media are bent on portraying black women as people who are angry, speaking vulgarities and wearing “ghetto fabulous attire.” She dismissed with she sees as a “psychological bag of tricks to undermine who we are.” On the contrary, black professionals who meet the highest standards are plentiful. She said that “we must tell our own stories.”

Judge Penny has excellent credentials herself, including attorney, former prosecutor, state assistant attorney general, the first African American Chief of Staff and legal counsel to Georgia’s Lieutenant Governor, licensed mediator, book author co-author, named among the Atlanta Business League’s Most Influential Women for the past 10 years, associate pastor, the main character and host of the syndicated daytime TV court series Family Court with Judge Penny, president/CEO of Divine Destiny Enterprises, LLC, and founder of a 501(c)(3) nonprofit committed to strengthening families, women, youth and children.  These are just a few of her accomplishments.

Sprinkled throughout her remarks at the AKA Founders’ Day event, the judge talked about attacks on the legacy of the African American community – including its leadership, traditional organizations, and the ordinary people who have answered the call to help make black communities better. She voiced concern about a generation of black young people in particular who are clueless to their history and even more so to the need to dream big.  Judge Penny told her audience that the failure of grand juries to return indictments in well-known racially-related cases of the past year or so show that “we’re almost irrelevant in the justice system.”

She sounded the call for service, the only plausible solution for the persistent ills that keep African American communities from moving forward as they should. “You’ve got to serve,” she said. “Service has to become a part of your DNA. We serve a God who says we must do it. You are the ones able to change the world.”

“I know you think that we have reached the Promised Land,” Judge Penny continued. “You think that we reached it in 2008 when President Obama came into office. We cried and we were overjoyed.  But when some representative that was his colleague stood up in that chamber and yelled out, ‘you lied,’ I knew then that all hell was about to break loose.”

“For the past six years, they have done everything they can do to discredit his (President Obama) name, his wife and his children,” she retorted.

Painting a mental journey weaving scenarios of the present day, the civil rights era and the old and new testaments of the Bible, Judge Brown Reynolds made a case that boiled down to submitting to service.  “We must be awakened to what is going on outside our houses and our churches,” she challenged. “We’ve got to stop believing that everything on reality TV is real.”

She maintained that while slavery is dead, the African American community is held hostage by drug dealers in neighborhoods where they rob communities for selfish gain, and men who father children and refuse to take care of them.

At a time when opportunities for African Americans are unlimited, Judge Brown Reynolds noted that “we can vote, attend the school of our choice, have high paying jobs, have our own TV show…the opportunities in front of us are unlimited. Yet, ‘black dollars, our economic power’ are not being spent for the good of black communities,” she said.  Black churches, sororities/ fraternities and businesses all have felt the backlash of a generation that puts self first, in a time when even the poorest black person would be considered well off compared to the condition of the majority of the world’s peoples.

“Are you willing to pay the price to reach the Promised Land?” Judge Brown Reynolds asked her audience. “Getting to the Promised Lad means you’ve got to wake up in the morning wanting to hep somebody else.” “Even in my mother’s womb, God had a place for me,” she said of her mother’s decision to keep her after being raped on her way home from work. Judge Brown Reynolds said her mother struggled to raise her a single parent, making the necessary sacrifices.

She noted that Dr. Martin Luther King’s Mountaintop Dream of the Promised Land was “simply restating Moses’ vision” in Deuteronomy, when he realized that he would not cross over to the Promised Land because he had been disobedient. “God allowed him (Moses) to climb up a mountain to see the big picture of what God had in mind for the people, and it was wonderful.” She said King’s Mountaintop vision was about how people would live.

Like Dr. King, though, Judge Brown Reynolds said that people in the African American community need to dream big dreams. “My dream allows me to look 50 years ahead and see my grandchildren and their children.” She said too many people climb mountains that do not allow them to see beyond the next day. “I’m burdened,” she said, “by the number of young black boys and black girls who come into my courtroom in chains, whose mountains were too small and their lives have been cut short.” In another instance, Judge Brown Reynolds used the parable that Jesus told a man who to Him for “philosophical conversation about who is my neighbor” to drive home the imperative of service. Instead of the priest and Levite who failed to stop to help the man “beaten down and bloodied” by thieves on the 16-mile curved road from Jerusalem to Jericho, Judge Brown Reynolds’ characters were two sorority sisters – an AKA and a Delta – who both strolled past the “sister left beat down and bloody” on the road.

“Some say the first one was on the way to a ceremony, and didn’t want to get her clothes messed up,” speculated Judge Brown Reynolds. “Some say the other was afraid of being late.”

“Along came the Good Samaritan. She wasn’t college-educated. She got her GED and went to community college. She was from the wrong side of the tracks,” (she) said in storyteller fashion.

Judge Brown Reynolds said her characters who passed by the “sister” in distress were concerned about themselves more than the condition of the person on the road. Her Good Samaritan had compassion and considered, “What’s going to happen to her if I don’t stop to help?” The question today is the same, Judge Brown Reynolds pointed out.

She urged the group to surrender “individualistic concerns to the broader concerns of all humanity, to give to the lease of these.

“The rest and favor of God will be upon you when you answer the call. Your soul will not rest until you stop to help.”