Monday marked a special day for a few outstanding student-athletes on campus who have wowed fans for the last four years on the courts and fields, as they received their degrees in a special graduation ceremony with their families, coaches and athletics staff in attendance at the FedEx Academic Success Center. 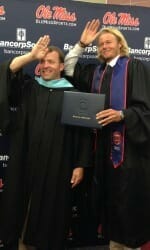 Chancellor Daniel W. Jones spoke to the graduates as well as athletics director Ross Bjork, before representatives of each school presented the student-athletes their diplomas.

Jones graduated from the Patterson School of Accountancy and was also a Sally McDonnell Barksdale Honors College Scholar. She has made the SEC Academic Honor Roll all four years and is a three-time ITA Scholar-Athlete. An All-American and All-SEC honoree, Jones will compete next week in the NCAA Singles Championship in Waco, Texas.

Stephens graduated from the School of Business Administration with a double major in marketing and management. She has earned All-SEC and ITA Scholar-Athlete honors and consistently made the Chancellor’s Honor Roll, Dean’s Honor Roll and AD’s Honor Roll.

Verboven graduated from the School of Engineering with a bachelor’s degree in civil engineering. She has made both the AD’s Honor Roll and SEC Academic Honor Roll multiple times.

All three helped the Rebels earn an NCAA bid every year of their careers and earn the ITA All-Academic Team Award.

“I am so proud of these ladies,” head coach Mark Beyers said. “You remember going through the recruiting process and then they commit and come in as freshmen, and now they are here graduating. They leave a tremendous legacy. They’ve helped make Ole Miss tennis a household name among the top 25 teams. It’s always bittersweet, but I am excited that they are getting ready to move on in their life and I know they will be successful in whatever they choose to do.”

Scholtz (Caledon, South Africa) left his mark on the tennis courts as the first player to be named SEC Freshman and Player of the Year in his career, as well as First Team All-SEC all four years. The three-time All-American graduated with a degree in general studies with minors in psychology, recreation management and legal studies. He has also made the SEC Academic Honor Roll, the Dean’s Honor Roll and the AD’s Honor Roll. Scholtz will be in Waco, Texas next week competing in the NCAA Singles and Doubles Championships.

“It’s a special day for Nik,” head coach Toby Hansson said. “He’s meant so much to our program, and we are very proud of him. I know his family is proud of him as well. He’s done so well, not only on the court, but in the classroom. I know he’s looking forward to next week and closing out his career on a fantastic note. We also want to congratulate Johan Backstrom, who received his degree Saturday. What an outstanding student-athlete. This is what it’s all about and both he and Nik have competed at the highest level on and off the courts.”

Kendricks is a member of USA Track and Field. He graduated with a degree in general studies with minors in military science, mathematics and recreation administration. In his three-year college career, Kendricks was a two-time NCAA Champion, two-time SEC Champion, World University Games Champion and the first person in school history to win a USA pole vault title. He’s also a member of the Ole Miss Army ROTC program, which just commissioned him as a second lieutenant in the U.S. Army this past Saturday. Academic accomplishments include making the SEC Academic Honor Roll and the AD’s Honor Roll several times.

A linebacker for the Landshark defense, Lewis is a projected August graduate from the School of Liberal Arts with a bachelor’s degree in psychology with a minor in recreation administration. He helped lead the Rebels to three consecutive bowl games, including a New Year’s Six Bowl game this past year, as well as helping the Rebels rank as the No. 1 scoring defense in the nation.