Prior to her professional career, McKinney notched a successful college career at the University of North Carolina, starting all four years at catcher and in the DH slot for the Tar Heels. As a sophomore in 2009, she earned second team All-ACC honors after earning a .305 batting average and throwing out 19 of 27 base stealers from behind the plate.

McKinney excelled in the classroom as well, earning a degree in communications and a minor in coaching in the spring of 2011. She was named to the All-ACC Softball Academic Team three times, and earned Dean’s List recognition four semesters throughout her career. As a senior, McKinney received the prestigious UNC Athletic Director’s scholar athlete award.

McKinney continued her softball career coaching at the University of North Carolina at Greensboro-UNCG. McKinney came to UNCG following a one-year stint with NC State as an assistant. In 2015, McKinney helped the UNCG Spartans to their third-straight winning season since 1992-94 with a 25-22 record. UNCG won a postseason game for the third-straight season after defeating ETSU in an elimination game at the SoCon Tournament. 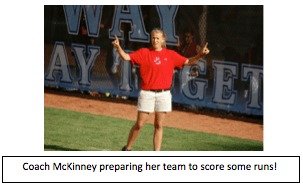 In McKinney’s second season, the Spartans were 31-26 earning 30 wins for the second-straight season. They made the SoCon championship game after winning four-straight elimination games. Outfielder Tory Wright was named to the SoCon All-Tournament team. UNCG scored the second most runs (331), hits (483), average (.312) while breaking the school record for most RBI at 306 and tying the home run mark (57).

McKinney guided Alcala to throw out six runners from the outfield and she set a new career high with a .984 fielding percentage. McKinney also helped UNCG reach the SoCon title game in her first year at the helm falling in extra innings to Georgia Southern. The Spartans scored the third most runs (290) and the fourth most hits (449) in school history.

In between coaching, McKinney has played two seasons with Carolina Diamonds and one season with expansion NJ/NY Comets of the National Pro Fastpitch softball league. In 2011, McKinney posted solid numbers, leading the squad in batting average (.298) and RBI (21) as a rookie. In addition, she was one of two members of the team to be named to the NPF all-star squad.
Brittany has spent her career hosting camps/clinics throughout the country with the specific goal of college exposure for the athlete. If you would like to contact Coach McKinney for lessons or a tryout, please email her at brittanymckinney10@gmail.com.