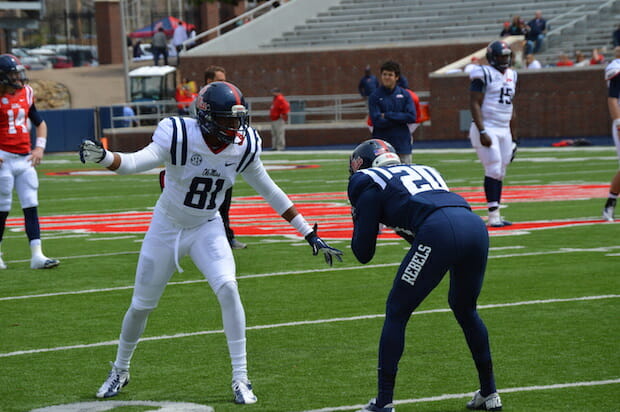 Despite losing all-time receptions leader Laquon Treadwell as well as Cody Core from last season, Ole Miss still has a bevy of depth at the wide receiver position through spring practice and into next season.

“Every year you’re going to lose somebody,” Ole Miss receivers coach Grant Heard said. “I don’t know how much it has really changed my room … I think the guys we have here, we can get the same stuff done.”

Senior Quincy Adeboyejo in particular is stepping into a leadership role among the extremely talented, yet young group.

“He’s the old man,” Heard said. “I lean on him a lot to help those young guys out. He’s accepting the role. It’s not an easy role to accept. That puts a lot of pressure that you always have to do the right thing. He’s doing a great job. I expect a lot out of him.”

While Adeboyejo and junior Damore’ea Stringfellow are expected to headline the group, the Rebels will also look to junior Markell Pack as well as redshirt freshman Van Jefferson and sophomore Damarkus Lodge. Both Jefferson and Lodge have have benefited greatly from getting a year in the offensive system under their belts.

Ole Miss also has three highly rated signees in A.J. Brown, Dekaylin Metcalf and Tre Nixon yet to arrive on campus that will have the opportunity to factor into the rotation immediately.

“You know my history,” Heard said. “Every freshman has a chance. We’ve only redshirted one kid since we’ve been here. They’ll have all the opportunity they need. If they’re the best, I’m going to play them. Competition makes my room better.”

The player that will be getting the ball out to the receivers in the fall, Chad Kelly, will miss the final week of spring practice due to a surgery to repair a sports hernia.

Kiffin Breaks Down the D-Line

Chris Kiffin has to replace one sure-fire NFL draft pick in Robert Nkemdiche and a probable late-round selection in Woody Hamilton in his Ole Miss defensive line group.

He thinks he’s on the right track.

“Anytime you lose a couple of great players, you’ve got to find a way to replace them. You see that coming far in advance. You have a plan recruiting and getting the guys in here you are wanting to develop,” Kiffin said following the Rebels’ Tuesday evening practice, the 13th session of the spring.

“The good thing is we were able to redshirt some guys and allow them to progress. Austrian (Robertson), Ross (Donelly), Garrald (McDowell), Victor (Evans)…those guys are all in their second and third year now, and we’re looking for them to step up.

“When you talk about replacing Rob and Woody, thank goodness you’ve got D.J. (Jones) and Breeland (Speaks) in there right now. We’re missing Fadol (Brown) and Issac (Gross) for spring ball, which are two guys, obviously, we’re going to count on in the fall to really help us. Overall, I’m very pleased with the group right now, and where they’re at in spring ball.”

Adeboyejo Ready For Next Step

Since his arrival at Ole Miss as part of the celebrated 2013 signing class, wide receiver Quincy Adeboyejo has been tracking toward becoming the Rebels’ top pass catcher.

Gone with Treadwell and Core are a combined 119 catches, 1,797 receiving yards and 15 scores. While Adeboyejo has help in his coming attempt to help fill those voids with a stacked group of fellow receivers, he inherits a good portion of the expectations.

Adeboyejo is the Rebels’ most proven receiver. He caught caught 37 passes for 604 yards and seven touchdowns last season, his most memorable coming against Alabama in what has affectionately been dubbed the “Tuscaloosa Tip” by Ole Miss fans.

“Those are big time players on the outside,” Adeboyejo said of Treadwell and Core. “As a group we’re just trying to step up. All the young guys are trying to better each other, so we don’t lose any steps.

Courtesy of David Johnson and Olemiss.247sports.com

For questions or comments, email Adam Brown at adam.brown@hottytoddy.com.