Ole Miss senior Robert Conyers is one of eight Southeastern Conference players and 57 total players that have been included on the 2016 Spring Watch List for the Rimington Trophy. The award is presented annually to college football’s best center by the Rimington Trophy Committee.

A native of Miami, Florida, Conyers is a three-year letterman for the Rebels. He has played 24 games with eight starts, including five starts at center last year before going down with a torn ACL at Memphis. He has helped Ole Miss reach a bowl game in each of his three seasons and New Year’s Six bowl berths each of the last two. His blocking has contributed to record-setting offensive performances and big victories like the 2014 wins over No. 1 Alabama, No. 4 Mississippi State and No. 14 Texas A&M, as well as the 2015 win at No. 2 Alabama.

The Rimington Trophy committee uses three prestigious All-America teams to determine its winner after the conclusion of the season: Walter Camp Foundation, Sporting News, Football Writers Association of America. Because the selectors of these three All-America teams can place centers in a “mix” of offensive linemen that includes guards and tackles, their 11-man first teams can often have two centers. The Rimington Trophy committee’s policy is to count all players that play primarily the center position for their respective teams, even though they may be listed as guards or tackles on the All- America teams.

The center with the most first-team votes will be determined the winner. If there is a tie with first-team votes, then the center with the most second-team votes will win. If there is still a tie, the winner will be determined by a majority vote from the Rimington Trophy committee. The winner will be recognized at the Rimington Trophy Presentation at the Rococo Theatre in Lincoln, Nebraska, on Saturday, January 14, 2017.

About the Rimington Trophy

Dave Rimington, the award’s namesake, was a consensus first-team All-America center at the University of Nebraska in 1981 and 1982, during which time he became the John Outland Trophy’s only double winner as the nation’s finest college interior lineman.

For more on the Rimington Trophy and a list of past recipients, visit www.rimingtontrophy.com.

The Rimington Trophy is a member of the National College Football Awards Association (NCFAA), which encompasses the most prestigious awards in college football. Visit www.ncfaa.org to learn more.

Ole Miss freshman Braden Thornberry completed the second round of play at the NCAA Men’s Golf Tuscaloosa Regional hosted by the University of Alabama Tuesday.

Thornberry carded a birdie on the 549-yard, par 5 No. 14 to finish his first nine holes at 1-over par. The Southaven, Mississippi native posted a second round score of 4-over 76 to finish the day 31st overall and 6th individually with a two-day total of 4-over 148. Leading the individuals is David Kocher of Maryland with a score of even par-142, while Georgia leads the teams with a score of 10-under par 566.

“Braden really fought hard out there today,” said Ole Miss head coach Chris Malloy. “He certainly hasn’t had his A-game in terms of ball striking but scrambled extremely well. I know he’s excited to get back out there tomorrowand get a low round in and see where that leaves him.”

Thornberry tees off the final round tomorrow at 10:02 a.m.  CST. Fans can follow live stats from the NCAA Tuscaloosa Regional at OleMissSports.com or GolfStat.com. For all Ole Miss Men’s golf news and information, follow the Rebels on Twitter at @OleMissMGolf, on Instagram at OleMissMGolf and on Facebook at facebook.com/OleMissMGolf. Fans can also follow head coach Chris Malloy on Twitter @CoachMalloy12. 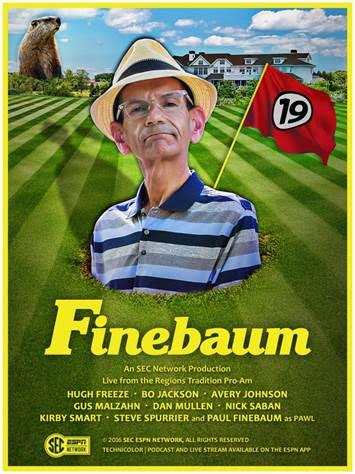 The Paul Finebaum Show makes its golf course debut on Wednesday, May 18 for its second stop in three consecutive weeks of remote shows. Last week the show was live from Gainesville, Fla. for the No.7 Vanderbilt at No. 1 Florida baseball game. In two weeks, May 31 and June 1, the show closes out its mini-road trip with its second annual trip to the Southeastern Conference Spring Meetings in Destin, Fla.

In addition to high profile interviews throughout the show, Taylor Hicks, winner of the fifth season of American Idol, will perform an acoustic set live.

For the second year, Finebaum is live from the SEC Spring Meetings in Destin, Fla. where football and basketball coaches, as well as school and conference administrators gather annually. Coaches from a variety of schools and sports, as well as Commissioner Greg Sankey, are expected to appear on the show over Tuesday, May 31 and Wednesday, June 1.

In addition to the South Carolina trip, The Paul Finebaum Show has visited the previously mentioned Florida baseball game (photos) and the SEC Men’s Basketball Tournament in Nashville, Tenn. The show also visited all 14 schools during the fall, previewing each campus on Friday prior to SEC Nation’s Saturday show.

The Paul Finebaum Show airs on SEC Network every weekday from 3 to 7 p.m. ET, taking calls from across the SEC and the country.