Johny Hill roamed the sidelines for 22 years as the Oxford High School football coach, but after the 2015 season Hill retired and former quarterback Chris Cutcliffe was named the head coach.

Cutcliffe had been the quarterback coach at Oxford High School the previous five seasons. Before that he was an offensive intern at Duke, where he received his masters degree.

Cutcliffe said it was extremely special to be the head coach at his alma mater. He also noted his path is similar to that of his dad, former Ole Miss head coach David Cutcliffe.

“My dad got his start as an assistant at his high school and then became the head coach. I’ve always known that and thought that was a neat situation. It’s definitely an honor to be able to fulfill that dream,” Cutcliffe said.
Oxford is coming off of three straight state championship appearances. The Charges have gone 39-6 the previous three seasons. They haven’t lost a district game since 2012.

“It’s difficult enough to replace those guys on the field,” Cutcliffe said. “The first thing that we have to replace is their leadership ability and their work ethic on the practice field and in the weight room. That’s the stuff that people don’t see, but that’s the area we have to have people step up first.” 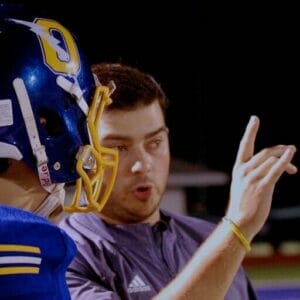 Abraham’s replacement at quarterback will be sophomore John Reece Mcclure. Mcclure was the freshman team quarterback last season, and got varsity reps later in the season.

“He got to see Jack every day at practice and get some valuable reps,” Cutcliffe said. “Getting to spend that time with Jack and seeing how he went about his business and how he carried himself was a really valuable experience for him.”

Oxford has four non-district games this season. They play three 6-A schools and county rival Lafayette High School. Cutcliffe said that playing the bigger schools, such as defending 6-A champion Starkville, 6-A North Half runner up Madison Central, and 6-A Southaven, provides the Chargers with a chance to know early where they stand, but it also prepares them for what is a tough 5-A district that features perennial power West Point.

“We try to create that atmosphere and those tough ballgames early to challenge our team and see how we respond,” Cutcliffe said.

Cutcliffe will serve as the head coach for his first time on August 19 at Southaven. He’s garnered a lot of lessons and teaching moments from Coach Hill over the years both as his quarterback and his quarterback coach.

“I saw that making a difference in kids’ lives was important to him,” Cutcliffe said. “One of his things that he always talked about was that he would never give up on a kid. They deserve to get a second chance. Those were valuable lessons that I took from him.”

Collin Brister is the staff writer for HottyToddy.com. He can be reached at collin.brister@hottytoddy.com.