Ole Miss Alum Eddie Fritts: A Giant Among Leaders In The Communications Field 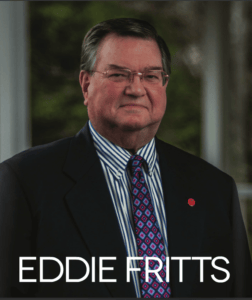 This story about Ole Miss alumnus Eddie Fritts, one of the major power players in the nation during the time of the communications industry’s greatest growth, is the cover story of the latest issue of The Meek Magazine. The magazine is a collaborative effort of journalism and Integrated Marketing Communications students with the faculty of Meek School of Journalism and New Media. Every week, for the next few weeks, HottyToddy.com will feature an article from Meek Magazine, Issue 4 (2016-2017).

When the time came for Eddie Fritts (’63) to think of college, his choices were the University of Tennessee at Martin with his high school sweetheart or the University of Mississippi, three-and-a-half-hours away from his hometown of Union City, Tennessee.

Fritts visited the Ole Miss campus with his father and friends, and experienced the first taste of the Rebel spirit at a football game.

“There was so much enthusiasm at the school; the aesthetics were so beautiful,” Fritts said.

He chose the University of Mississippi.

“I learned so much at Ole Miss, not only with academics, but as a first-generation college student and an only child,” Fritts said. “I learned how to interact socially, how to dress and so much about the human life experience. It wasn’t excelling in the classroom for me, but what I learned from all of the extracurricular activities I was a part of.”

Following college, Fritts married his high school sweetheart, Martha Dale, and soon after, they were expecting their first child. They moved to Indianola, where Fritts borrowed a down payment from his mother to buy a down-and-out radio station, taking management skills he had learned from his father and applying them to his new venture. Fritts recalled coming home the second day from the radio station with $27.82 in his pocket and saying to himself: “You know, this might take longer than I originally thought.”

Despite the challenges, Fritts and his family found their groove and eventually bought other stations in Mississippi, Louisiana and Arkansas. He served in chairman positions with the Mississippi Broadcasters Association, and then became president in 1972. He was elected to the National Association of Broadcasters (NAB) radio board in the late 1970s and later elected the NAB joint board chairman.

In 1982, Fritts was elected president and chief executive officer of the NAB and served for 23 years in the position that took him to Washington D.C. During his tenure, he had many victories, including the must-carry/retransmission consent provision in the 1992 Cable Act that aided in the transition from analog to digital television. He also helped secure the regulatory reform of radio and television in the 1996 Communications Act.

“Eddie Fritts has been a national leader in broadcasting for years,” said Will Norton, Jr., dean of the Meek School of Journalism and New Media. “And he has used his considerable skills to support and advance university causes. He has been an exceptional strategic advocate.”

In 2006, Fritts started The Fritts Group, a boutique political affairs consulting firm that provides strategic counsel to various telecommunications companies in the areas of political consulting, government relations, international affairs and public relations. Representing clients such as CBS, Fox, NAB and Sprint, Fritts’ work with the NAB in lobbying and positioning for broadcasters has carried over to his current work for clients. Fritts works with FCC and Congress in making sure the broadcast industry remains focused and competitive with other forms of media.

In 2011, Fritts was honored with the Distinguished Service Award from the NAB for his contributions to the broadcasting industry. Previous recipients include former President Ronald Reagan, Walter Cronkite, Oprah Winfrey and Bob Hope.

“After stepping down from the association five years prior, and for them to come back saying they wanted to honor me with the award, it was wonderful,” Fritts said.

During Fritts’ time in Washington, he served as vice-chairman of President Reagan’s Private Sector Initiative Committee. He received international awards, including being decorated with the French Medal of Arts and Letters, the Golden Ambrosiana of Milan and the Lion of Venice.

“Reagan was the most influential and inspirational president we have had,” Fritts said. “He hired very competent people to do what needed to be done within the White House and administration.”

Fritts witnessed firsthand Reagan’s presidency in visits to the White House several times a year, and he traveled with the president on international trips such as the black-tie dinner at the Palace of Versailles in France that included the top 200 business leaders of America and corresponding countries.

“As a young, relatively new Washington resident, I was all eyes. It was all fascinating to me,” Fritts said. “I just felt that Washington worked better as a town and as a country, that his leadership taught me that one person can make a big difference in the world, that one person who sets their mind to it can change the course of history.”

The University of Mississippi remains as a place of fond memories. Fritts calls it a “love affair” for him that has continued with his family. All three of his children graduated from the university, and he has endowed a scholarship with the Ole Miss Women’s Council in his wife’s name. Martha Dale Fritts serves on the Women’s Council and also has served the University of Mississippi Foundation board.

Fritts is an Ole Miss Alumni Hall of Fame inductee and first-ever recipient of the Ole Miss Silver Mike award for his compelling contributions to the board of the University of Mississippi Foundation. Currently, Fritts serves on the Board of Visitors of the Meek School of Journalism and New Media and on the Trent Lott Insititute Advisory Board.

“Eddie Fritts is a giant among leaders in the communications field,” said Ed Meek, former assistant vice chancellor of public relations for Ole Miss. “He skillfully managed or influenced the diverse interests of the television networks and local television stations, and navigated the arrival of satellite and internet delivery while handling the industry’s critical issues with the Federal Communications Commission.”

“It is not an overstatement to say Eddie Fritts was one of the major power players in the nation during the time of the communications industry’s greatest growth. He also created one of the largest and most profitable technology trade shows in the world held in Las Vegas which helped to finance the very important National Association of Broadcasters. Not bad for a ‘good ol’ boy’ from Mississippi.”

With consistent visits to his beloved college town, Fritts loves seeing all the development and growth across campus.

“For an old alumnus to see how far we have come in Ole Miss Athletics and academia, with the intersection of old and new, and everyone having a good time, it doesn’t get any better than that,” Fritts said.