Recently, it seems like the Alabama-Ole Miss contest has been the best game within the Southeastern Conference featuring top-ranked teams. Sorry LSU, but the Rebels have been more consistent since Chad Kelly has become the signal caller and the team has beaten the Crimson Tide each of the last two seasons.

Courtesy of Kevin Cunningham and to read the rest of this article go to Saturday Down South.com

When Ole Miss and Alabama face off Saturday in Oxford, the Rebels will be going for their third straight win over the Tide, and you can be sure fans from both sides will be in full throat throughout.

While the first meeting between the teams was in 1894 – Saturday’s will be just the 61st meeting, though, and only the 10th in Oxford – Ole Miss’ resurgence has created unparalleled excitement for this game in recent seasons. And if you listen closely Saturday, you could hear cheers that are recognizable across college football and one that each school feels is uniquely theirs.

The uniqueness is up for question.

OLE MISS’ “HOTTY TODDY”
No one really knows for sure when the “Hotty Toddy” cheer arrived in Oxford. There’s conflicting records that all boil down to “It’s just a part of Ole Miss.”

Courtesy of Kassidy Hill and to read the rest of this article go to GridironNow.com.

Since Saban rejoined the SEC in 2007 and launched Alabama’s decade of dominance, no single quarterback has beaten his Tide team twice. LSU’s Jordan Jefferson and Jarrett Lee tag-teamed Saban twice, including the WWE-like 9-6 slugfest in 2011.

Courtesy of Chris Wright and to read the rest of the article go to Saturday Down South.com 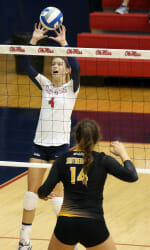 In their final non-conference matches of the season, the Ole Miss volleyball team heads to Chattanooga, Tennessee this weekend for the Scenic City Showdown hosted by Chattanooga at Maclellan Gym.

Ole Miss opens the tournament Friday at 2 p.m. CT against Tennessee State. On Saturday, the Rebels will face Appalachian State at 9 a.m. CT followed by the host, Chattanoooga, at 6 p.m. CT. Live stats of all the matches and live video of the Chattanooga match can be accessed on the tournament central page on OleMissSports.com.

Quick hits
• Ole Miss went 3-1 last week with wins over Arkansas State, Virginia Tech and Northwestern and suffered their first loss of the season against Lipscomb, who is coming off consecutive NCAA Tournament appearances.
• Junior outside hitter Kate Gibson and junior middle blocker Taylor Alexander were named to the Lipscomb Invitational All-Tournament Team. Gibson posted her fourth double-double of the season and second straight with 20 kills and 15 digs in the win over Northwestern. Alexander added a career-high 16 kills and hit .522.
• Taylor Alexander finished the week with a .418 hitting percentage and ranks 10th in the SEC in hitting percentage at .367. She has hit above .300 in 7 of 10 matches and above .400 in 5 matches.
• Kate Gibson ranks fifth in the SEC with 3.76 kills per set and sixth in points per set at 4.21.
• Ole Miss is 37-2 in non-conference matches under head coach Steven McRoberts.
• With their 3-2 wins against Virginia Tech and Northwestern, the Rebels improved to 4-0 in five-setters this season.
• Junior outside hitter Lexi Thompson notched her eighth double-double in 10 matches with a match-high 21 kills and 14 digs against Northwestern. She currently leads the SEC in double-doubles and ranks 12th in points per set at 3.80.
• Senior setter Aubrey Edie recorded her fourth double-double of the season with 49 assists and 13 digs vs. Northwestern. Already with the career record in hand, Edie needs just 29 assists to reach 4,000. Edie currently ranks fifth in the SEC in assists per set at 10.55.

Rebels vs. Tigers
Ole Miss and Tennessee State are tied 1-1 all-time. The Rebels defeated the Tigers 3-1 last year in the Magnolia Invitational.

Looking at Appalachian State
Appalachian State heads into the weekend with an overall record of 2-8. The Mountaineers are led Emma Longley, who was named Sunbelt Freshman of the Week after setting a school-record with 37 kills in the match against Ball State last Saturday at the Morehead State Tournament. Longley is averaging 4.90 kills per set.

Rebels vs. Mountaineers
Ole Miss is 1-0 all-time vs. Appalachian State. In the first meeting, the Rebels won 3-0 at the Jacksonville Invitational in 1989.

All about Chattanooga
Chattanooga enters the weekend at 5-5 after going 0-3 at the Bluejay Invitational hosted by Creighton in Omaha, Nebraska last weekend. The Mocs lost to No. 4 Kansas 3-1 before being swept by TCU and Creighton.

Rebels vs. Mocs
Ole Miss holds a 1-0 all-time record vs. Chattanooga. The last time the two teams met (2013), the Rebels came away with a 3-0 win in the Magnolia Invitational.

Coach McRoberts on the weekend
“Appalachian State was a top 100 RPI team last year. They are struggling a little this year. Chattanooga at their place will be tough, they were a top 100 RPI team last year and they are picked to win their conference this year. We are hoping that we can continue to have a good week of practice and come out and win all three to go into conference play 12-1. We have put ourselves in a pretty good RPI position for making that NCAA tournament come December.”