HottyToddy.com provides readers a roundup of the commentary and information about the Ole Miss Rebels from various publications around the Web.
Readers can check out the latest information in a single post each day throughout the year. Here at HottyToddy.com, we are doing all the leg work to find the information that people want about Ole Miss sports.

The Ole Miss track & field teams look to carry momentum from a sensational debut weekend to the upcoming Rod McCravy Memorial, hosted by the University of Kentucky this Friday and Saturday.
The No. 21 Ole Miss women boast NCAA leaders in the shot put (Raven Saunders – 19.10m/62-8) and weight throw (Janeah Stewart – 21.83m/71-7.5) after their opening-weekend performances at the Commodore Invitational in Nashville, Tennessee. A number of freshmen stood out in their college debuts to boost the Rebels’ confidence against some stiff competition this weekend.
Women’s teams in Lexington, Kentucky, this weekend will include No. 4 USC, No. 5 Texas, No. 8 Kentucky, No. 10 Purdue, No. 13 Baylor, No. 14 Miami, No. 21 Ole Miss, Clemson, Harvard, Illinois, Indiana, Kansas, Penn State and UCF.
Men’s teams in action will include No. 6 USC, No. 7 Texas, No. 20 Penn State, Baylor, Clemson, Harvard, Illinois, Indiana, Kansas, Kentucky, Miami, Ole Miss, Purdue and UCF.
Ole Miss will send to the start line some of its top distance runners for the first time this indoor season. It will be their first competition in the Red and Blue since the men earned fourth place and the women were 23rd at the NCAA Cross Country Championships in November.
On Friday, the women’s pentathlon starts at 9:30 a.m. CT, with field events getting underway at 12:30 p.m. and running events at 5:10 p.m. Saturday’s slate will kick off with men’s heptathlon at 9 a.m., field events at 10 a.m. and running events at 11 a.m.
The meet will be broadcast on SEC Network+ on Saturday beginning at 11 a.m. CT. The live broadcast will feature highlights of some of the top events from Friday as well.
Courtesy of Ole Miss Sports

Rebels Fall to No. 5 South Carolina 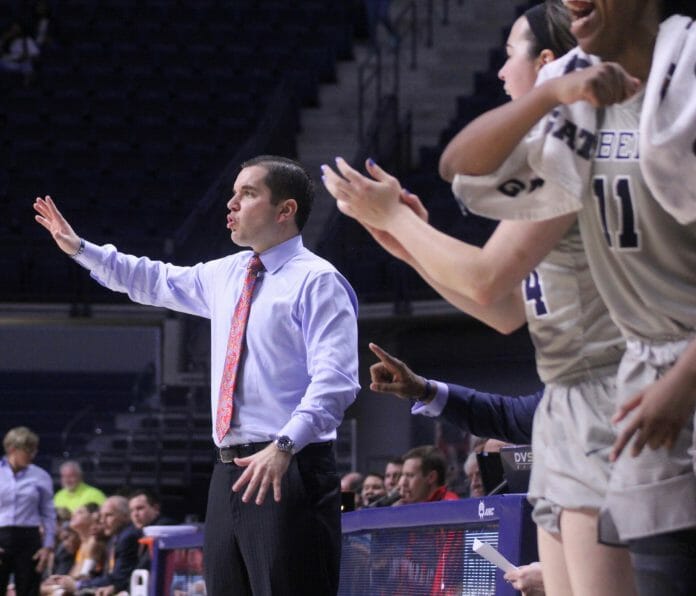 The Ole Miss women’s basketball team battled from start to finish with the No. 5 South Carolina Gamecocks on Thursday night but couldn’t score the upset road victory, falling 65-46 at the Colonial Life Arena.
Ole Miss scored five straight to open the fourth quarter and got the lead to 15 points, 55-40, at the 8:08 mark, but back-to-back big points from South Carolina’s Bianca Cuevas-Moore stopped any of Ole Miss’ momentum and sparked a 7-0 South Carolina run which saw the Gamecocks pull ahead, 59-40 at the media timeout, a lead they wouldn’t give up the rest of the way.
Taylor Manuel (St. Louis, Mo.) was a huge spark in the second half for the Rebels. The forward scored 13 points in the second half and was Ole Miss’ presence in the paint throughout. Shandricka Sessom (Byhalia, Miss.) added 11 points for Ole Miss – her third straight game in double figures and 15th of the season. Sessom also lead the way on the glass with seven rebounds. Ole Miss couldn’t get any offensive rhythm all night, shooting just 36 percent (19-of-52) from the floor, and was 6-of-14 from the free throw line.
Out of halftime, Ole Miss forced a South Carolina turnover on the first play and a foul on the other end sent Manuel to the line. The forward tallied five early points and established herself in the paint for the Rebels, who tried to chip away at the Gamecock lead by getting out in transition and getting to the free throw line. Ole Miss was able to make some headway but couldn’t stop the Gamecocks Kaela Davis, who seemed to make shots from everywhere.
The game was fairly evenly played in the first quarter with the Gamecocks leading 12-7 at the first media timeout. The Rebels made the Gamecocks convert from the line early with six of their first 12 points coming from the free throw line. Sessom converted on a beautiful backdoor pass to cut the lead to 12-9, but the home team used an 8-2 spurt to take a nine-point lead at the end of the first quarter, 20-11.
Sessom, who historically has been successful against South Carolina, continued that trend in the first quarter with six of Ole Miss’ 11 points, which led to 10 first-half.
Ole Miss cut the lead to five points, 20-15, with four consecutive points to start the second quarter, but nine first-half turnovers led to South Carolina points, particularly in the second quarter. Ole Miss had six in the second quarter, which led to 12 South Carolina points. The Rebels had success in the paint with 12 points, but trailed 37-22 at halftime.
Courtesy of Ole Miss Sports