HottyToddy.com provides readers a roundup of the commentary and information about the Ole Miss Rebels from various publications around the Web.
Readers can check out the latest information in a single post each day throughout the year. Here at HottyToddy.com, we are doing all the leg work to find the information that people want about Ole Miss sports.

Ole Miss Football took a big step in bolstering its defense with the addition of high school early enrollees Ryder Anderson and Breon Dixon on Monday, the first day of spring semester classes.
Anderson, a defensive end from Katy, Texas, and Dixon, a linebacker from Loganville, Georgia, join a 2017 class that already includes three junior college defensive standouts – Jones County JC defensive back Javien Hamilton, Northeast Mississippi CC linebacker Brenden Williams and Jones County JC defensive end Markel Winters – and New Mexico Military quarterback Jordan Ta’amu. These six will go through spring drills with the team in preparation for the 2017 season.
“Ryder and Breon are extremely talented young men, and we are excited to have them on campus for the spring,” head coach Hugh Freeze said. “Ryder is a winner and a gifted pass rusher that brings great length on the edge. Our staff made a strong connection with Breon during the recruiting process, and we hope he can help us address a need area right away. We appreciate both student-athletes and their families for their commitment to our program.”
The rest of the 2017 Ole Miss class can begin to submit national letters of intent on National Signing Day, which is Wednesday, Feb. 1.
Below are complete bios on the Rebels’ high school early enrollees.
Ryder Anderson | DE | 6-6 | 231 | Katy, Texas | Katy
HIGH SCHOOL: A consensus 3-star prospect according to the major recruiting sites … Ranked the No. 85 defensive end in the country by ESPN and the state of Texas’ No. 10 DE by Scout … Helped Katy to a 10-3 record as a senior after a perfect 16-0 season and state championship his junior year … The Tigers’ allowed just 62 points his entire junior year, pitching shutouts in 10 games … Compiled a high school career record of 55-6 … Played defensive end, outside linebacker and tight end … Younger brother of Oklahoma running back Rodney Anderson and nephew of former Alabama and NFL defensive end Mark Anderson.
Breon Dixon | LB | 5-11 | 218 | Loganville, Ga. | Grayson
HIGH SCHOOL: Under Armour All-American … Rated a 4-star prospect by ESPN, Rivals and Scout … Listed as the nation’s No. 144 overall recruit and No. 8 outside linebacker by ESPN … Listed as the No. 18 OLB by Rivals and No. 24 OLB by Scout … Rated the No. 19 prospect in Georgia by ESPN, No. 24 by Rivals and No. 32 by Scout … Led Team Highlight with three tackles for loss in the Under Armour All-America game … Helped Grayson to a 14-1 record and the 2016 7A state championship with a 23-20 overtime win over Roswell … Posted 64 tackles, two interceptions, 12 sacks and more than 20 tackles for loss as a senior … As a junior at Peachtree Ridge, had 12 sacks and four interceptions … Transferred to Grayson after his junior year, the same high school as former Ole Miss defensive standouts Denzel Nkemdiche and Robert Nkemdiche.
Follow Ole Miss Football on Twitter (@OleMissFB), Facebook and Instagram. For more information, visit www.OleMissSports.com.
Courtesy of Ole Miss Sports 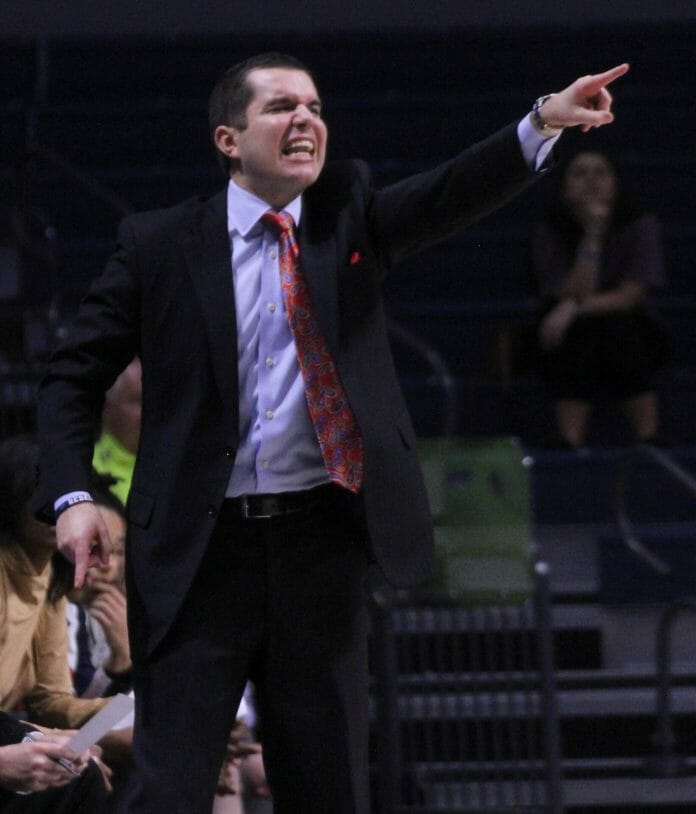 The Ole Miss women’s basketball team (13-7, 2-5 SEC) got as close as one possession in the final two minutes but couldn’t complete the comeback dropping a 65-57 contest to Alabama on Sunday afternoon at The Pavilion at Ole Miss. The loss snapped a 12-game home win streak for the Rebels.
Madinah Muhammad (Chicago, Ill.) led the offense with 18 points while Taylor Manuel (St. Louis, Mo.) tallied her second consecutive game in double figures with 13 points. Shandricka Sessom (Byhalia, Miss.) added 11 points and a team-best six rebounds.
Ole Miss used a 5-0 run to open the fourth quarter sparked by a putback from Manuel and a triple from Muhammad to take a 48-44 lead and forced the visitors to take a timeout less than a minute into the fourth quarter. Alabama (15-5-3-4 SEC) fought back though and held a 57-55 lead with 2:19 remaining before going on an 8-2 run over the final minutes to earn the win. The Rebels struggled from the floor for the second consecutive game, shooting just 35.6 percent (21-of-59).
Out halftime, Ole Miss started with the ball and Muhammad promptly nailed a jumper to spark a 6-0 spurt, which tied the game at 25-25 forcing the Crimson Tide to call a timeout at the 7:42 mark. From that point the teams traded buckets, but Alabama was able to keep the lead until the 2:54 mark when Manuel converted an old fashioned three-point play to give Ole Miss a 41-39 lead at the 2:46 mark – the first lead for Ole Miss since the 7:09 mark of the first quarter.
The third quarter was close throughout with neither team taking more than a four-point lead throughout, but it was the visitors with a 44-43 lead heading into the fourth quarter.
Alabama jumped out to a 8-4 lead behind two big threes from Hannah Cook forcing Insell to call a timeout to help the Rebels regroup and the home team was able to get a little momentum from Muhammad who hit a triple, but Ole Miss trailed 17-9 a the end of the first quarter.
Alabama extend its lead to 10 points, 21-11 at the 7:59 mark, but Ole Miss used some defense and a bucket from Cecilia Muhate (Madrid, Spain) to get the lead back to single digits midway through the quarter. Ole Miss’ renewed energy on the defensive end forced the visitors into nine turnovers in the second quarter as Ole Miss was able to cut the Alabama lead to two possessions, 25-19, at halftime.
Courtesy of Ole Miss Sports

Ole Miss soccer landed two key transfers in Mary Kate Smith and Julia Phillips, head coach Matthew Mott announced Monday.
Phillips joins the Rebels after a year with Florida State, where she helped lead the squad to a 14-4-4 record. In her time in Tallahassee, the Seminoles fell no lower than No. 13 in the top-25 poll, advancing to the second round of the NCAA Championship.
Smith starts her final two years at Ole Miss after previous stops at Southern Miss, and most recently Jones County Junior College. The Ellisville, Mississippi native was named a NJCAA Division I Honorable Mention All-American and All-Region 23 performer after scoring 21 goals and 18 assists in 2016.
See below for a full bio and quotes on Smith and Phillips.
Julia Phillips | So. | Midfielder | 5-6 | Ashburn, Va. | Florida State
2016 (Freshman – Florida State): Transfer from Florida State … Saw minutes in wins at Middle Tennessee and at home against Mercer … Helped FSU to the second round of the 2016 NCAA Championship … Seminoles were ranked in top-10 of poll all of regular season.
HIGH SCHOOL: Attended Bishop O’Connell and Stone Bridge High School … Varsity starter during freshman and sophomore seasons … Named second team all-conference as a freshman … Earned all-metro honorable mention and first team all-conference honors as a sophomore, as well as being named a finalist for Virginia Player of the Year … Also played basketball.
CLUB/ODP: Competed for FC Virginia ECNL and was ranked in the top ten for final three seasons … Invited to the Atlantic ECNL PDP team in 2013, 2014 and 2015 … Played in a friendly match against the U-17 Italian National Team at Centro Technico Coverciano … Traveled to Germany with the Virginia State ODP team in 2011 and was a team captain … Competed with the Washington Spirit Reserves in the WPSL during the summer of 2016.
PERSONAL: Full name is Julia Paige Phillips … Born October 15, 1997 … Daughter of Brad and Tina Phillips … Has one brother, Tyler.
COACH MOTT QUOTE ON PHILLIPS: “Julia is a very good midfielder who can score with either foot. She’s very good in the air and very good in possession. We’re excited to bring her in so she can help strengthen our midfield. Getting her here this semester will certainly help her to play in the SEC.”
Mary Kate Smith | Jr. | Midfielder | 5-4 | Ellisville, Miss. | Jones County JC
2016 (Sophomore – Jones County JC): NJCAA Division I Honorable Mention All-American and All-Region 23 performer … Scored 21 goals and recorded 18 assists totaling 60 points, second-most in the MACJC and Region 23, and 15th nationally … Helped the No. 11 Lady Bobcats to a 15-2 record, the MACJC/Region 23 Tournament Championship, and an appearance in the NJCAA District H playoffs … Scored two goals and was named the South team’s MVP in the MACJC All-Star Game in November.
2015 (Freshman – Southern Miss): Played in all 19 contests for the Golden Eagles … Second on the team in points (8) after scoring two goals and leading the team in assists (4) … Scored in games at Nicholls (Aug. 28) and vs. UTEP (Oct. 18).
HIGH SCHOOL: Lettered at South Jones High School in Ellisville, Mississippi … Helped Braves to the playoffs each season … Named first team all-district as a freshman, sophomore and junior … Selected to the 2015 South All-Star team … Also played football, earning second team all-region 3-5A honors … Honor student and member of the Beta Club, Student Council and S.M.A.R.T. Club, while serving as class president.
CLUB/ODP: Played club with Gulf Coast United.
PERSONAL: Full name is Mary Kate Smith … Born June 15, 1997 … Daughter of Jesse and Jennifer Smith … Has one brother, Conner.
COACH MOTT QUOTE ON SMITH: “Mary Kate comes highly recommended from a number of coaches I respect. She’s a hard-working, fast forward that can play also in midfield. Watching video on her, I think she’s someone that could come in and help us right away. She comes to us from the same area as Sara Coleman, and there have been a lot of comparisons between the two. We look for her to be a very good player for us.”
Keep up with all the latest news and information on the Rebels by following Ole Miss Soccer on Twitter at @OleMissSoccer, on Facebook at Facebook.com/OleMissSoccer, and on Instagram at Instagram.com/officialolemisssoccer. Also follow head coach Matt Mott on Twitter at @CoachMattMott. Additionally fans can get a behind the scenes look at Ole Miss Athletics on Snapchat under the handle, @WeAreOleMiss.
Courtesy of Ole Miss Sports
Facebook
Twitter
Pinterest
Previous article
Monday’s Top 7 Instagram Photos By HottyToddy.com
Next article
Meek School's Dean Norton Reflects On The Life Of Oxford Newspaper Legend Jesse Phillips