Spring break in Oxford can easily be described as quiet and serene. Most college students are gone for break, and many families have ventured to beaches and amusement parks. However, there are some loyal locals who stick around and look forward to an event that breathes life back into the sleepy Square, the annual Oxford St. Paddy’s Pub Crawl.

In 2010, Joe Dickey moved to Oxford and immediately created a new tradition. Over the past seven years, the event has grown to attract hundreds of people to the Square, all dressed in green and ready to have a good time.


“I was in Oxford for St. Patrick’s Day in 2009,” Dickey said. “I went out on the Square that night, and there weren’t many people around. I moved here in 2010 and decided that needed to change. This is Oxford, and we should celebrate St. Patrick’s Day right.”
This year the 8th annual Oxford St. Paddy’s Pub Crawl is set to kickoff at 3 p.m. on Saturday, March 18, with a new sponsor and larger crowd than ever. For the first time, the pub crawl will be sponsored by Jameson Irish Whiskey.
“The first year it was just me and some friends,” Dickey said. “We might have had around 15 people that year. Last year, we had around 400 people, and this year we are expecting even more, especially with Jameson sponsoring. There will be a lot of great giveaways and samples from Jameson.”
The first 300 attendees will receive a St. Paddy’s day pen, and all attendees will receive beads and have the opportunity to try the two newest offerings from Jameson Irish Whiskey, Jameson Caskmates and Jameson Black Barrel. 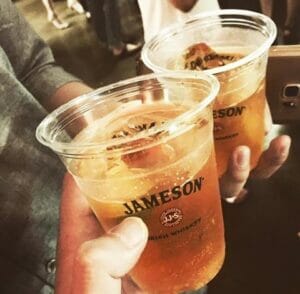 The future of the annual Oxford St. Paddy’s Pub Crawl is bright, according to Dickey, whose vision is for the pub crawl to help local businesses and boost the economy even more so than it already does.
“I really want this to grow and become a community event for the whole city,” Dickey said. “Usually, St. Patrick’s Day falls somewhere in spring break, so the pub crawl is during spring break. There isn’t much going on in town, and this brings people out. It brings locals out and brings money and life to the Square.”
As for the attire, casual and costumes are both welcome. Attendees of the event can be seen in everyday clothes, in all green or even in kilts.
8th Annual St. Paddy’s Pub Crawl locations:
Frank and Marlee’s
Proud Larry’s
Round Table
Funky’s
Rooster’s
Blind Pig
Local’s
The Coop at the Graduate.
For more information, visit the 8th Oxford St. Paddy’s Pub Crawl Facebook page here.