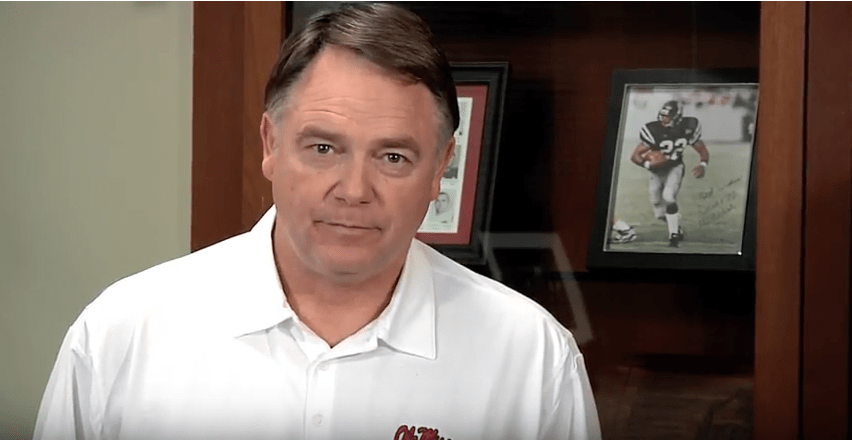 Former Ole Miss coach Houston Nutt has dropped his refiled lawsuit against the University of Mississippi and the IHL board.
Ole Miss and Nutt issued a joint statement announcing they had come to an agreement without a financial settlement. The joint statement included an apology from the university to Coach Nutt:
“The lawyers who represent the University and Coach Nutt have communicated during the past few weeks to reach an agreement that would allow the parties to resolve Coach Nutt’s claim while avoiding the costs and distractions associated with further litigation. The parties have reached such an agreement.”
In a separate statement on the lawsuit, the University said:
“Certain statements made by University employees in January 2016 appear to have contributed to misleading media reports about Coach Nutt. To the extent any such statements harmed Coach Nutt’s reputation, the University apologizes, as this was not the intent. The NCAA’s Notice of Allegations dated January 22, 2016, did not name or implicate Coach Nutt in any misconduct, and it would have been inappropriate for any University employee to suggest otherwise.”
In his own statement, Coach Nutt said:
“I am pleased to put the lawsuit behind me. Best wishes to the future of the Ole Miss Football program.”
Last Wednesday, Clarion-Ledger sportswriter Antonio Morales reported that Nutt had refiled a complaint alleging breach of contract, breach of duty, breach of good faith and fair dealing. That suit called for punitive damages.
The original lawsuit was filed in federal court on July 12, but was dismissed by a United States District Judge on August 9.

Adam Brown is the sports editor of HottyToddy.com. He can be reached at adam.brown@hottytoddy.com.

By John Macon GillespieContributorhottytoddynews@gmail.com Ole Miss has an excess of talent in the...
Read more
Football

Hotty Toddy News will be running stories about local candidates in the upcoming Nov. 3 election throughout the rest...
Read more
Crime Report

An Oxford resident will have to appear in court to answer to a charge of animal cruelty for allegedly leaving a rabbit with no food or water.
Read more
Latest Videos

Ole Miss junior Tylan Knight is embracing his new role on the field with...
Read more