October 27, 2017
0
617
Rolling Stone magazine founder Jan Wenner isn’t a big fan of the man who wrote “Sticky Fingers”—the new book, that is, not the classic rock album.
A warts-and-all biography of the legendary publisher, “Sticky Fingers: The Life and Times of Jann Wenner and Rolling Stone Magazine” has been making headlines for reasons that Wenner certainly didn’t envision when he hand-picked journalist Joe Hagan to write it. As the New York Times reports, Wenner has described the book as “deeply flawed and tawdry,” while Hagan told Billboard that Wenner “de-friended me on Instagram” after the book came out. 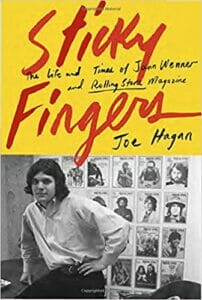 Hagan, a journalist who has written for New York magazine, Rolling Stone and the Wall Street Journal, will read from “Sticky Fingers” at 6 p.m., Thursday, November 2, at the Thacker Mountain Radio Show at Off Square Books.
“Sticky Fingers” is described as “the story of a mercurial, wide-eyed rock and roll fan of ambiguous sexuality but unambiguous ambition who reinvents youth culture, marketing the libertine world of the late 60s counterculture in a stylish, glossy package that would stand for decades as a testament to the cultural power of American youth.”
Wenner cooperated with Hagan on the book, giving the author enviable access to rock legends like Paul McCartney, Bob Dylan, Mick Jagger, Keith Richards, Bruce Springsteen and Bono. But Hagan told Billboard that Wenner “did push me very hard to try to get me to let him read the book before I submitted it. And I just said, ‘I can’t do it.’”

When Wenner finally got his hands on the book, he was evidently displeased, but he hasn’t told Hagan why. “He’s gone radio silent,” Hagan told Billboard. “He de-friended me on Instagram. That’s the most I can say. Through the grapevine, I’ve heard that he thinks it’s salacious. And he hates the title. He doesn’t like the sexual stuff.”
According to USA Today, the book is sprinkled with “jaw-dropping, casually recounted moments of rock history.” It’s now available at Square Books in Oxford.