Oxford’s own Johnny McPhail is a featured actor in a new music video by the late Greg Allman.
The video, directed by Erica Alexandria Silverman, debuted online today—which would have been Allman’s 70th birthday—at rollingstone.com.
In “Song for Adam,” a haunting number written by Jackson Browne, a biker reflects on a long-ago friendship with a man who has since passed away. McPhail plays one of the two bikers as an older man. 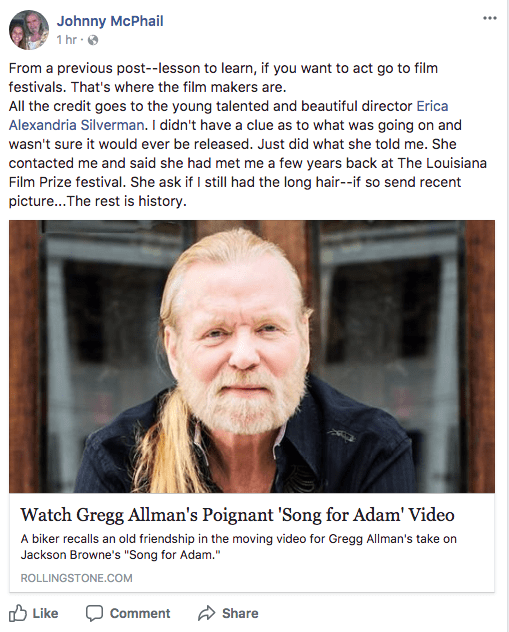 Zach Chance, one-half of the band Jamestown Revival, also stars in the video, along with Zoe Graham and Yates Robertson.
McPhail posted a link to the video on his Facebook page and noted: “All the credit goes to the young talented and beautiful director Erica Alexandria Silverman. I didn’t have a clue as to what was going on and wasn’t sure if it would ever be released. Just did what she told me.”
He also explained how he came to be cast in the video.
“[Silverman] contacted me and said she had met me a few years back at the Louisiana Film Prize Festival. She ask[ed] if I still had the long hair—if so send recent picture…The rest is history.”


McPhail also garnered nationwide attention with a small part in the first season of the HBO series “True Detective.”
Silverman told Rolling Stone that the character in “Song for Adam” reminded her of her father. “He was a motorcycle-riding badass who lived and died in Florida,” she said. “I pulled a lot of the narrative from his life. He and Gregg were born the same year and probably would have been buds.”

She said the video was shot in various cities in Texas. “I grew up listening to the Allman Brothers and couldn’t believe the opportunity,” she told Rolling Stone. “Gregg and his music represent so much to so many different people. I hope the video carries an ounce of his spirit. This is for you, Gregg. I miss you, we all miss you.”