June 19, 2014
0
392
Soccer famously has been called “the beautiful game,” to which I would quickly add that beauty surely is in the eyes of the beholder.
On the other hand, basketball — the way the world champion San Antonio Spurs play the sport — is beautiful, indeed.
By whipping the Miami Heat four games to one in the NBA Championship series, the Spurs have reminded us that basketball — at its core — is a team game that must be played, equally hard, at both ends of the floor. They have showed us once again the best individual players do not necessarily win the game, and that the best team does.
Lebron James clearly is the most talented basketball player in the world, but he and his highly touted teammates were rendered helpless by the Spurs. The Spurs’ average margin of victory in the championship series was 14 points, the largest in NBA history. They clobbered the Heat.
Please, do not take this as a knock on the Spurs’ talent. Tim Duncan is on the short list when the discussion begins about the best power forwards in the history of the game. He is a no-nonsense, efficient player. Tony Parker, the point guard, is one of the best in the sport. Kawhi Leonard, who will turn 23 later this month, made the recent championship series his personal coming out party. 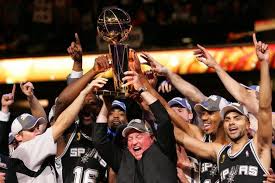 But the Spurs are so much more than those three. Frenchman Boris Diaw averages but nine points and four rebounds per game, but he makes everyone around him a better player. He makes point guard-like passes from the small forward position.
Manu Ginobili, Danny Mills, Tiago Splitter and Patty Mills all play important roles.With the Spurs, the sum is far, far greater than its parts. What the Gregg Popovich-coached Spurs possess is basketball synergy. They share the basketball. They really do appear to enjoy playing together.
We take you now to a moment during the post-game press conference when Popovich was asked about Duncan’s achievement of setting the NBA playoffs record for most double-doubles.
Said Popovich, without hesitation, “I can assure you he does not care.”
Later, Duncan said as much in his post-game interview. And that pretty much says it all about the Spurs.
My guess is that the statistic Duncan liked best was the Spurs’ team shooting percentage, which was 52.8 percent for the championship series. That’s smoking hot and it comes from sharing the ball and taking good shots..
Besides reminding us that basketball is a team sport, the Spurs also reminded us of just how international the sport has become. Eight of the Spurs were born outside the U.S., including Duncan, who is from the Virgin Islands. Parker and Diaw are from France but Parker was born in Belgium and Diaw’s father is from Senegal. Ginobili hails from Argentina. Splitter is from Brazil, Marco Belinelli from Italy. Mills and Aron Baynes are both Australians.
They form what could pass as a United Nations of basketball and they are coached by Popovich, an American but the son of Serbian and Croation immigrants.
The Spurs speak a variety of languages but they clearly understand one word, no matter the language. That word: Team.
Rick Cleveland (rcleveland@msfame.com) is the executive director of the Mississippi Sports Hall of Fame and Museum.
Facebook
Twitter
Pinterest
Previous articleBrand Reach >> Considering Plastic Surgery? Researching Surgeon Key to Safety
Next articleTea for t’Arts Making a Splash, Giving Back in Downtown Tupelo