25 Years Ago, This Unforgettable Story Began…

Brace yourself for this very, very special story. It hits home to me as I am an alum of the University of Mississippi, also known as Ole Miss. 25 years ago Vanderbilt’s Brad Gaines was hit by Chucky Mullins of Ole Miss near the goal line. The hit left Mullins paralyzed instantly.

This split second meeting would change the direction of each of their lives forever. The two would forge a deep friendship that lasted until Chucky died of complications from a blood clot 2 years later. Their friendship started when a guilt ridden Brad visited Chucky – down to 120 pounds – in the hospital. Barely able to talk and with his neck in a halo and tubes everywhere, Chucky whispered to Brad “it wasn’t your fault.”
It wasn’t his fault, but there is not a day that goes by that Brad doesn’t think of Chucky several times. Every year since the play, Brad has driven the 4 hours from his Tennessee home to Chucky’s grave in Russellville, Alabama 3 times a year – the anniversary of the hit, the anniversary of Chucky’s death, and on Christmas. He has done this for 25 years. He will do this until he dies.

When Brad was dating the lady that would become his wife, he told her the Christmas visit would never change, even if they had kids. They have 4. The Gaines family gets up at 4 AM for presents and then Brad drives to Chucky’s grave. He does it because he feels no one should be alone on Christmas. He takes cleaning materials and fresh flowers and cleans Chucky’s marker and the marker of Chucky’s mother. He talks with him, and listens. He always recites this Bible verse for strength, going and coming – Psalms 55:22: “Cast your cares on the Lord and he will sustain you; he will never let the righteous be shaken.”When Chucky got the blood clot and faded fast, Brad was at his bedside. When he died, Brad went to the roof of the hospital and sobbed. When the Ole Miss football team was on the bus going to Chucky’s funeral, Ole Miss coach Billy Brewer spotted Brad out the window. He had the bus stop and had Brad ride with them, telling the team that for that day Brad was an Ole Miss Rebel. When the hit happened and Brad learned after the game of Chucky’s health, his love for football disappeared immediately. Brad was one of the SEC’s best players, ran a 4.5 40 and was NFL material. Texas and Alabama had recruited him. After leading the SEC in receptions as a junior that season, he did not return as a senior. To this day, Brad’s cell phone ends with 3800. The number 38 was Chucky’s number. . 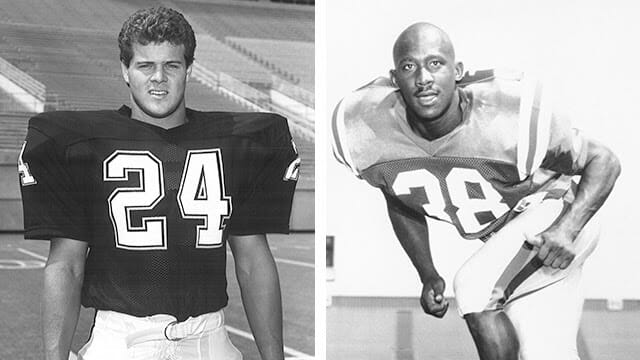 Brad was from an affluent family. Chucky had been orphaned at 11 after his father abandoned him and his mother died. His high school football coach and his wife adopted Chucky and his brother.
Brad had been heavily recruited by schools such as Alabama and Texas before picking Vanderbilt. A skinny Chucky talked himself into a scholarship at Ole Miss, refusing to accept coach Brewer’s initial walk on offer. He leaned forward and put his elbows on Brewer’s desk, something Brewer said no other player had ever done. He told coach he didn’t have the money for Ole Miss and the scholarship was his only way to education. He promised them that if they signed him, he would give them everything, EVERYTHING, that he had! The coaches loved his attitude and gave him a full scholarship. When he got to Oxford the only possession he had was a small bag with some clothes. He didn’t even have bed sheets. His roommate, teammate Trea Southerland went out and got him some and left them on his bed without telling him would had done it.
When the accident happened, Mississippians came together – black and white – to raise a tremendous amount of money for his care. Race relations grew tremendously. And just recently a powerful documentary has been released on their story entitled‘It’s Time.” It has already made a powerful impact on race relations as viewers see the love between the two men. The title came from the first time the team saw Chucky since the accident. They were getting ready to face the Air Force Academy in the Liberty Bowl in Memphis, where Chucky had been in the local hospital. Before kickoff ,the ambulance arrived and the players got all fired up. They carefully wheeled Chucky’s bed out. Coach Brewer leaned over and asked Chucky if there was anything he wanted to say. He whispered, “It’s time!” 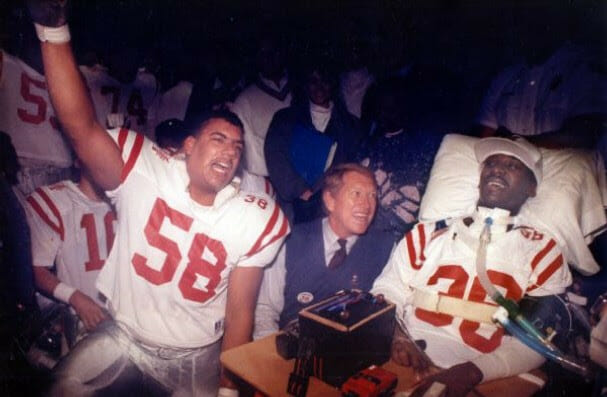 Air Force didn’t have  a chance. Ole Miss beat them that night 42 to 29.To this day, each year the number 38 is awarded to an Ole Miss defensive player that best exemplifies the courage of Chucky Mullins, and a statue of Mullins’ approach to life is near the field.

I had the privilege of emceeing and speaking at the Ole Miss football banquet the year that would have been Chucky’s senior year. It was amazing to see the impact that young man from humble background had made. I had attended the bowl game of that year that, again, would have been his senior year. With Ole Miss in control, the clock was stopped late in the game so reserves could get in the game.I looked up at the scoreboard and the clock just happened to sit on….:38.There are inspiring stories like that out there everyday. There is such negativity in the world today that sometimes you don’t know it, which is why for years I have focused on stories like this in the keynote Stoke the Fire Within.