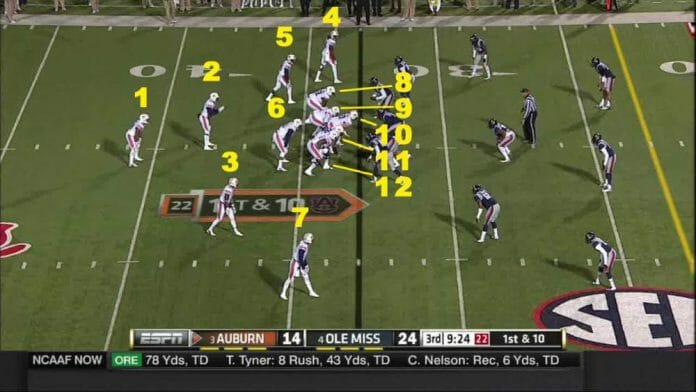 Football commentary by HottyToddy.com contributor Steve Vassallo
I guess we’ve all seen the photo by now, but if not, it’s included for one more good look. To borrow a line from John, Paul, George and Ringo: “I saw him standing there.” One of my tailgating buds noticed the 12th man before the play unfolded and then waited for the flag that never was thrown!
It’s one thing to lose, but another to have a game taken away by Halloween trickery. I guess I must be naive in believing that “fairness” will always prevail. I mistakenly thought that the officials actually counted the number of players on the field before the ball is snapped. Whatever the system they have in place, it ain’t workin!
We came very close to losing the Bama game by one of the most flagrant non-calls in NCAA history that gave the Tide a touchdown almost putting the game out of reach!
When is enough, enough? ESPN has a new feature highlighting NFL miscues entitled “Come on, Man.” It’s too bad they cannot include collegiate actions within this program.
I was told by a reliable source that the new 12th man offensive alignment occurred on as many as four plays in the now infamous game of Nov. 1. I have not seen the actual film footage to verify if this account is factual.
However, based upon what we do know, I believe strongly that the entire game needs to be investigated now. If it is clearly apparent that the officials missed a number of key calls that impacted the outcome, there needs to be a vehicle to alter the standings!
If not, the entire integrity of the NCAA playoff system is up in smoke. These kids and coaches are investing too much of their lives and souls into these games to have the outcomes decided by either incompetence or trickery. The amount of money being invested into these contests is staggering. The ticket prices alone are significant, not to mention the premiums we have to pay for the privilege of sitting in a certain location.
Having said this, we the fans, deserve better as to our EXPECTATIONS for fairness being the reigning theme each and every time our team suits up!
In his weekly press conference, coach Hugh Freeze made this statement about the multiple missed calls by the officiating team this weekend.
“I tell my three children all the time that life’s not fair. I got a letter from former Chancellor (Robert) Khayat about some of these things. Sometimes it’s unjust. What I mean by that is the reward you get is really not equal to the effort you put in or to what you think you might have deserved out of a situation.
“As far as the calls, our officials work extremely hard at being the best at what they do. I have confidence in the leadership they have in Steve Shaw. It is frustrating at times for certain things that you feel like you saw a different way. Just like at the time I thought it sure looked like it should have been a horse collar call. After watching the film, it wasn’t. Sometimes I don’t see things correctly. You’re frustrated when you see certain things, but I have confidence in them. I make bad calls, too, sometimes.”
Here’s what the Twittersphere has been saying since the information was discovered: