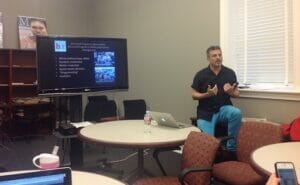 The writing program manager at Bleacher Report, King Kaufman, visited The University of Mississippi on his tour of SEC schools — talking to students about the sports site and how to be a part of it.
Kaufman will be the first to tell you that, when Bleacher Report started in 2007, it was not considered the most credible outlet for sports information.
“Bleacher Report began as a platform,” said Kaufman. “Give us your email and start writing about your favorite team. We built a lot of traffic that way, but as you can expect, the content was not stellar…we shorted quality.”
Other journalists were often quick to criticize the site’s focus on “growth and page views” over quality.  Eventually, Kaufman says, it was the market that told them to get better.
“The growth stopped because advertisers and newspapers did not want to put their logo next to the Bleacher Report logo,” said Kaufman. “We were the lowest common denominator.”
In 2012, Turner Broadcasting acquired Bleacher Report, which not only gave it a huge cash flow but also a great credibility boost. According to USA Today, the goal of the purchase was to integrate Bleacher Report with properties such as CNN, NBA TV and TNT.
Kaufman says that Bleacher Report has since become the No. 3 site for online sports news, in part, by improving the quality of the journalism.
“We started paying people and we created ways of teaching journalism internally, newsroom education, feedback and materials that helped people who were already writing for our site to get better,” said Kaufman.
Another way Bleacher Report is now finding good writers is by offering what it calls its “Advanced Educational Programs.”  These paid training programs in sports writing and editing are open to undergraduates and graduate students.
Kaufman says they want writers who really understand the sports audience.
“Our mission is not to get the most hits for the most stories,” said Kaufman. “Our mission is to give the best possible experience for our readers.”
Ole Miss journalism student Kendyl Noon contributed this story.