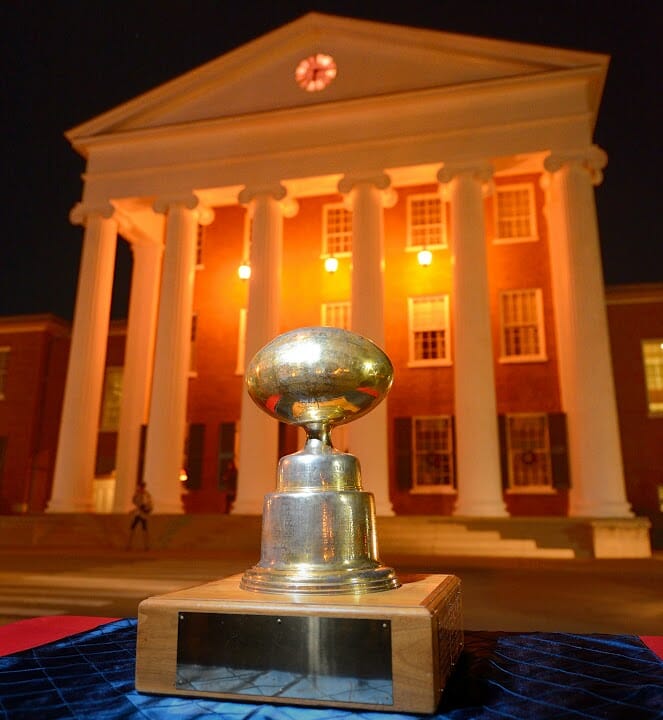 I’m committed to telling it like it is in this column. If the Arkansas game was the biggest game of the year for the Rebels, as I stated previously, a combination of mental mistakes, injuries an inability to make the big play at crucial time led to Ole Miss not meeting the test in Fayetteville.
That said, I don’t believe Ole Miss quit. I believe we battled and the defense played hard despite the number of points the Razorbacks eventually put up.
The defensive goal line stand that was frustrated by an offsides call was a matter of inches from marking a potential comeback. With key injuries on both sides of the ball, puzzling execution errors and matchup problems along the line of scrimmage, good intentions and spirited play aside, the Rebels got their ass kicked.
When I say mental mistakes, I’m thinking of two key interceptions in the game, but I’m not putting the blame on Bo Wallace in these cases. You can question his decision to throw the balls, but I believe the receiver, in both instances, could have done a better job of fighting through the coverage to deny the defensive back the ball. In those cases, if an offensive pass interference penalty is called, that’s just the price of preventing critical turnovers.
As a journalist, it’s my job to point out such deficiencies, but as an ex player at the highest level, it’s also my job to point out to a frustrated Rebel Nation that these are just kids who we burden with our hopes and aspirations. They’re working hard and they have accomplished great things this year. But kids make mistakes, folks.
So let me state exactly what I think about where we are as a football team and a fan base. Rebel Nation, if you’re feeling disappointed, if you’re feeling let down after the euphoria of beating Alabama and Texas A&M, let me ask you one thing: How the hell do you think the players and the coaches feel?
We move on to the Egg Bowl and it may seem like an uphill battle, but this is a game that is still winnable. Winnable only if the entire Rebel Nation will re-energize itself and be determined to cheer with everything they have on Saturday.
Cheer and yell and scream to show these young men and hard-working coaches how much you appreciate what they have done this year for you, this community and this university.
I know that my finest games and most thrilling moments as an Ole Miss basketball player came when Rebel Nation put me on their shoulders and carried me to heights I could have never dreamed of as a young man growing up in Memphis. Let’s do that for this deserving and bruised and battered football team as they take on their fiercest rivals at the Vaught.
It all comes down to this game.

Johnny Neumann has been voted one of the top college basketball players of all time for his achievements during his brief tenure at Ole Miss. Neumann was a High School All-American at Overton High and brought his talents to Ole Miss in 1970. The statistics Neumann compiled over just ONE season at Ole Miss are proof of his greatness. Currently Neumann is an Ole Miss student again majoring in journalism. He spent many years in the NBA and ABA and as a coach. His goal is to enter sports broadcasting.
Neumann: