Adams: The Book that Transformed Life of Coach of Last Night’s Big Game 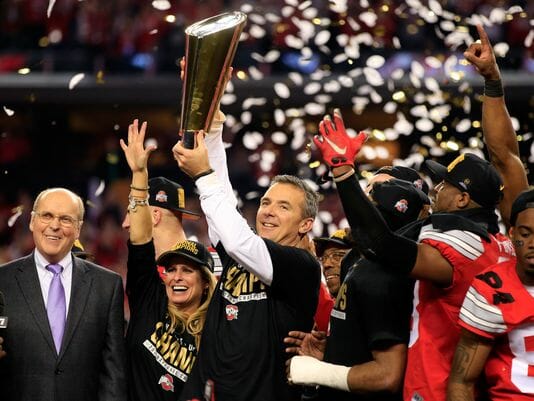 Urban Meyer coached Ohio State to the National Championship in last night’s big game, as his team defeated Oregon 42-20. In just his third year as head coach in Columbus, he has taken the Buckeyes to tremendous success.

Flash back to 2009. He was head coach of Florida and had just coached a big game earlier in the day. Meyer woke up in the middle of the night with chest pains. He tried to get up but fell to the floor. His wife, Shelley, called 911. This was part of the call:

“My husband’s having chest pains,” she said. “He’s on the floor.”

“Is he awake?” the operator asked.

He could not speak and was rushed to the ER. It was not a heart issue, but esophageal spasms. Anxiety and panic attacks can cause them, and Meyer was under tons of stress as head coach at Florida. He worked constantly at trying to keep that program at the top of the mountain in college football. The stress caused him to go from 217 pounds to 180. He told Bryant Gumbel of HBO that he was taking two Ambiens and a beer on top to try to get any sleep late at night. 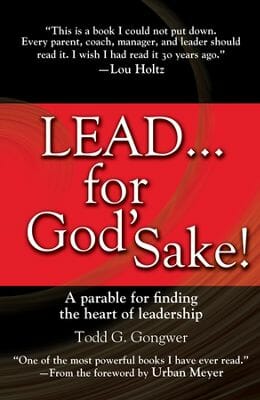 Struggles with work/life balance and the stress led Meyer to leave coaching for a broadcasting job. It was when a friend gave him a copy of the book “Lead … for God’s Sake!” that his life was transformed.

He read in cover to cover on a cross country flight. The book covers how the lives of a very successful CEO, very driven high school coach, and a very wise janitor intersect. Below is more from the author.

I once saw Gongwer give a passionate motivational talk on leadership when I was part of the speaker line up at Bethel College. I could not get over how much enthusiasm he had for the topic of leadership. so, when I started hearing the buzz about this book I got a copy and, like Urban Meyer, could not put it down.

I speak to a lot of organizations were work/life balance is a challenge. I was in TV News for 25 years and it is a huge challenge in that industry with working Christmas Eve night, many more holidays weekends, night shifts and such. I think anytime we can get something that helps us in that area, it is a good thing.

In researching my Talk on how the Miracle on Ice happened, I have learned a lot about how coach Herb Brooks approached work/life balance. He loved yard work, especially shrubs and trees. He knew the Latin terms for everything he planted, and would often work with his little girl Kelly out there. He would plant a bunch of things, and later dig them up and develop a different pattern.

Herb also did not bring work home. He was happily married to Patti until his car accident in 2003 and of the reasons they clicked so well was that she did not know a hockey puck from a grapefruit. When he came home, they talked about other things. 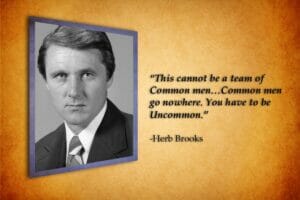 Herb also kept fresh with his career choices. After coaching the 1980 Miracle team, he coached a semi pro team in Switzerland the next year. His favorite movie was Rodgers & Hammerstein’s The Sound of Music so it was a chance for the family to live in a beautiful area for him to recharge and get close to his family again. The toll of building that Olympic team that would stun the Soviets had been big.

The other day I read a story on Gongwer about how this book “Lead… for God’s Sake” came to be. He had been in a successful family business of Nelson’s famous Port-A-Pit® chicken (his college degree was Organizational Management) and he was also an assistant coach on the national power Bethel College men’s basketball team.

“Then (in 2002), for whatever reason, my 2 ½-year-old son walked through the door,” he told Al Lesar of the South Bend Tribune last week. “That’s when it hit me: That’s what it’s all about – relationships. Reality kicked it. This is what matters most.”

He simplified, leaving the business and coaching, and started delivering programs on leadership for a few years. It was during that time he was led to write the book, and is convinced God inspired him with the content. He says he realized that was his mission, and the strong impact of the book has shown it was indeed his mission. The book has gone over extremely well and there is talk of a possible movie version of it. Gongwer will only allow it to be made into a movie if it is a first class production.

As I was reading what he read about being compelled to write it and it being his mission, I felt a connection. In July of last year I walked into that arena where the Miracle on Ice happened and from that point on have been on a mission to share their remarkable story.

One of the reason Herb Brooks spent so much time with his grand kids was that he wasn’t able to spend as much time with his son and daughter. They used to sit in the den and watch the cars coming up the road, guessing that the 4th next car would be daddy. Like so many, Herb was an extremely driven man on a mission, and what he accomplished would be a huge source of national pride. They galvanized a hurting nation, started the slide that would end Communism in the Soviet Union, and saved the Winter Olympics from being terminated. If anyone could justify being at the office a lot, it would be Herb. We all have to look at what we do and decide is it worth it to take a piece out of our hide to accomplish what all it is we are accomplishing.

No one worked harder in college football than Urban Meyer. He went with the approach of there was always something he could be doing. It took falling to the floor one night and then getting a fateful book to get him to look at the big picture. He is still intense and cares, but has a whole different approach and one that is a lot healthier.

This is what he wrote and has framed in his office at Ohio State :

1. My family will always come first.
2. I will take care of myself and maintain good health.
3. I will go on a trip once a year with Nicki (daughter) — MINIMUM.
4. I will not go more than nine hours a day at the office.
5. I will sleep with my cellphone on silent.
6. I will continue to communicate daily with my kids.
7. I will trust God’s plan and not be overanxious.
8. I will keep the lake house.
9. I will find a way to watch Nicki and Gigi play volleyball.
10. I will eat three meals a day.

He is a different man these days, still able to reach the pinnacle of his profession as he showed last night, but able to prioritize. He even is having more fun. Meyer promised his team he would get a tattoo if they won last night, and the players are going to hold him to it soon.

Below is a short video of the author and Meyer speaking about the book: