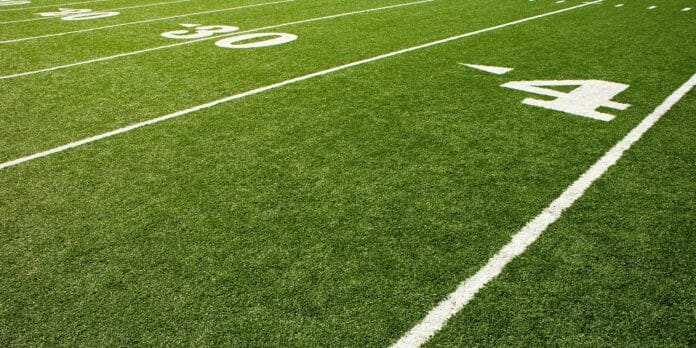 Someone asked me a perfectly good question last week: Why is a football field called a gridiron?

Back in the old days, back before helmets had face masks and few players even wore helmets, a football field was lined vertically, as well as horizonally. A football field looked like a grid and some wise guy, probably a sports writer, called it a gridiron.

By 1920, football fields no longer had vertical lines but the term “gridiron” stuck. Here we are 95 years later and football teams everywhere strive for gridiron greatness, just as too many sports writers and sportscasters strive for alliteration.

Some sports scribes even took it a step further and started referring to football players as “gridders.” Yes, it sounds silly, almost like critters. But you still see the term “gridders” used, usually in newspaper headlines. Why? Because “gridders” fits where “football players” won’t.

And then there are cagers, which is another name for basketball players. Why?

Back in the late 19th and early 20th centuries, basketball was often played on stages. Players, striving for loose balls, would sometimes fly from the stage, injuring not only themselves but also spectators. In the interest of health, the stages were surrounded either by protective fences or netting. Apparently, it looked as if they game was being played in a cage. Thus, some enterprising sports writer — sportscasters hadn’t been invented yet — called the court a cage and the players cagers. Here we are more than a century later, and the term cagers remains, again mostly in headlines.

Makes absolutely no sense, but it fits. So there you are.

Golfers? We call them linksters, because the earliest golf courses in England, Ireland and Scotland were links-styled courses next to oceans. The first nine holes went in one direction, the second nine holes came back to where it all started. The holes were linked, as it were. Scarcely any American courses are like that, but we sometimes refer to American golfers as linksters. I do not know why.

I, myself, belong to the sub-species of linksters known as duffers. I do not know why poor golfers are known as duffers other than “duff” is kind of the sound that is made when you hit the ground behind the ball instead of hitting the ball. Here lately, duffers have also become known as hackers. I prefer duffer. I duff. Therefore, I am a duffer. Makes far more sense than linkster. Sounds better than fool.

Fact is, sports terminology is filled with misnomers, not all of which can be blamed on sports writers. Since the advent of the designated hitter, most baseball lineups consist of 10 players. But baseball teams are referred to as “nines.”

Obviously, math is not a strong point of either.

Rick Cleveland (rcleveland@msfame.com) is executive director of the Mississippi Sports Hall of Fame and Museum.