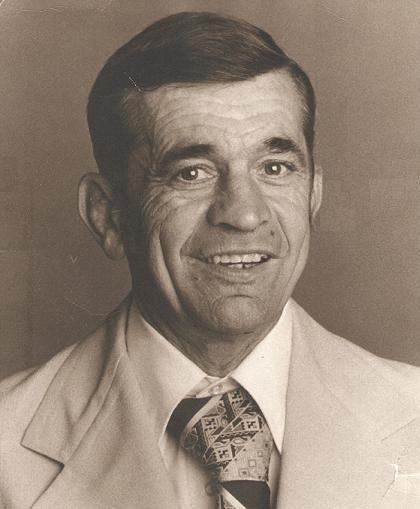 William Hal Sanders was affectionately known as “Nub” by the Ole Miss family. Mr. Sanders was part of that group of Ole Miss football legends. Vaught, Poole, Kinard, Hovious, Davidson, Knight and Sanders and many more will live in Ole Miss and Oxford history forever!

Nub was born on July 24, 1932, in Yocona, Mississippi. He was delivered at home and weighed a whopping 13 pounds. Forceps were used during the difficult delivery and the forceps slipped and pinched the top of his spinal cord resulting in his Cerebral Palsy. Doctors told his mother that he would never walk but she insisted that he would. She expected him to do the same things her other boys did (Bobby Sanders, long time Oxford High School coach is one of his brothers.) She would not allow others to treat him differently.

Mr. Sanders met Johnny Vaught while he was delivering the Commercial Appeal and going to Northwest Junior College. Coach Vaught was three months behind on paying his bill and Nub went to talk to him about it. Coach Vaught was impressed with the way he handled the business so matter of factly, and asked him if he would like to work as a student trainer. He jumped at the chance and worked his way up to being named Equipment Manager and then assistant to the athletic director.

Having an incredible memory, Sanders knew every combination to every locker and all the sizes of even the shoes for each player on the football and baseball teams.

“He drove my mother nuts doing large calculations in his head when they were doing taxes; he was always right and was faster than she could do them on a calculator.”
–Sara Sanders Smith

Paige Cothren, in his book, Walk Carefully Around The Dead, relates a great “Nub story.” It seems that after an Ole Miss game in Memphis, the athletic staff all went to Jim’s Steak house. The waitress, before taking their dinner orders, asked if anyone would like anything from the bar. One by one, the guys ordered their drinks until finally it was Nub’s turn. Looking up into her eyes, he enthusiastically decreed, “I’d tade’ ah Schitz,” (I’ll take a Schlitz,) unable to pronounce the “L” in Schlitz. The waitress stiffened, leaned back, slanted her eyes and barked, “What did you say?”

I can’t understand you!

When I was young, my father, Jack Cofield, once introduced me to Mr. Sanders. I was scared of him (I was just a kid). Dad told me to shake Mr. Sanders hand, and I did. Later, in the car, Dad taught me a life lesson. That although Mr. Sanders had a medical problem, he was no different or less than any other man. That all people on the planet are an equal unit of one.