Ole Miss and “Hotty Toddy,” there just can’t be one without the other. It’s one of many strong, proud traditions in the SEC.

While Rebel fans shout it any time they get the chance, fans from other schools often wonder what the saying and chant even mean. It’s actually a very good question.

That being said, let’s dig a little deeper into the mythical “Hotty Toddy.”

What are the origins of Hotty Toddy?

While it’s a great question, there’s no definitive answer. The mystery is part of what makes it so unique. Just call it the Eighth Wonder of the World.

Among some of the more popular suggestions of origin floating around are that it was developed after the Virginia Tech Regimantal Band called The Highty Tighties, derived from a cheer used throughout World War II, associated with the description of a warm alcoholic drink or a term that referred to the perceived sentiment of the Ole Miss student body.

To many Rebel fans, the possible Virginia Tech connection may be a surprising one. While The Highty Tighties didn’t officially receive their name until 1919, the regimental band actually dates back to 1892.

By 1919, the Regimental Band began to be known as the Highty-Tighties. The origin of the name has been hotly debated for years — some claimed it was part of a cheer, others claimed it sprang from a trip to Richmond where the Corps and Band marched in honor of Field Marshal Foch, the supreme allied commander of WW-I. Supposedly the drum major had dropped and then recovered his baton while rendering a salute in front of the reviewing stand and someone in the crowd yelled hoity-toity. Southwest Virginia slang had supposedly turned this into Highty-Tighty.

Actually as an official Ole Miss reference, the first documented evidence of the phrase (then written as “Heighty! Tighty!”) appeared in a November 19, 1926 copy of the student newspaper, The Mississippian.

In the newspaper that day, the following words appeared:

Who in the hell are we?

Ever since the first print appearance in 1926, the Ole Miss cheer has just been passed down from generation to generation of Rebels fans. Today, only the spelling is different than it was in 1926.

Most importantly, it’s the answer to “Are you ready?”

Outside of being part of the answer to the question “Are you ready?,” Hotty Toddy is also a way one Ole Miss fan greets another. It’s no different than an Alabama fan saying “Roll Tide” or a Texas A&M fan shouting “Gig ’em Aggies.”

ESPN’s Doug Ward wrote, “‘Hotty Toddy’ has no real meaning, but it means everything in Oxford. For students, fans and alumni, it is a greeting, cheer and secret handshake all rolled into one. ‘Hotty Toddy’ is the spirit of Ole Miss.”

He’s spot on, as the cheer embodies the spirit of the school. While it’s commonplace to hear “Hotty Toddy” in the Grove and at Ole Miss games, what’s special to Rebel fans is how much further the saying extends past athletics.

It only takes seeing an Ole Miss logo or design on a shirt for a fellow Rebel to proudly say, “Hotty Toddy!” In return, the other person proclaims a warm “Hotty Toddy.”

Some of the random places I’ve received an unsolicited “Hotty Toddy” include Walt Disney World, Augusta National at the Masters, New York City, the Las Vegas Strip, and even a Target in Auburn, Alabama, of all places.

From “Roll Tide” to “War Eagle” to “Hotty Toddy,” it’s the seemingly small things that come together as a whole to make the SEC such a tradition-rich conference.

While Rebel fans incorporate the saying into everything from sporting events to weddings and funerals, it’s become synonymous with Ole Miss among the national media. 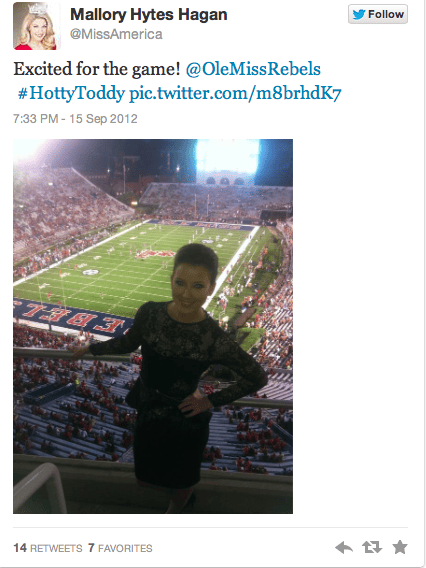 Shouting It From the Vaught

If you really want to hear the answer to “Are you ready?” in its full glory, be in the stands at Vaught-Hemingway Stadium in Oxford five minutes before kickoff.

Every home game, immediately before kickoff, a truly “secret” celebrity guest appears on the jumbotron to hype up the crowd and ask, “Are you ready?” for the first official chant of the game. James Franco led the chant before the Egg Bowl of 2012.

Just hear it from the stands once, and you’ll know the words forever. Hotty Toddy!

Seph Anderson, Sportswriter to The South, covers timely Ole Miss, SEC and national news from the sports world. Follow him at @SephAnderson.