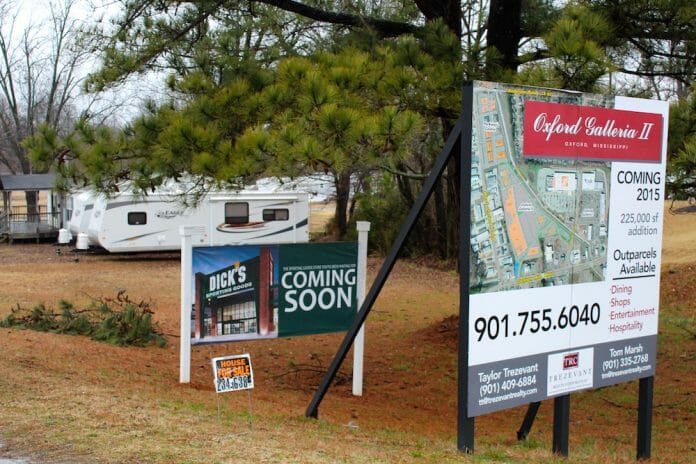 Early last year The Oxford Eagle published a story about a developer beginning a $35 million dollar retail project for the Oxford Galleria II. This was the first time that 18-year-old Lakyn Gibson, her two sisters, mother, grandmother, uncle and their household that also includes two dogs and seven cats heard that they might need to relocate their trailer homes of 11 years.

“(The owner) hasn’t told us anything about moving,” said Betty Bovee, known as Mimi to her three granddaughters. “We found out about it in the newspaper about a year ago, then a year ago in January a sign was put up.”

Bovee’s oldest granddaughter, Lakyn, added that after they ran errands one day they returned to see a sign that the land their home is sitting on was going to be turned into what is known as the Oxford Galleria II.

Oxford Galleria II is a 208,770 square foot shopping center that will be located on Jackson Avenue West, where the Ewing Trailer Park Community currently sits. The corporation constructing the new shopping center is Trezevant Realty Corporation.

John Trezevant, President of the Germantown-based Trezevant Realty Corporation, was unavailable for an updated comment, but told HottyToddy.com in July that they are designing a retail development, which is scheduled for a fall 2015 opening.

“I am not at liberty to name the retail establishments, however, I can say that there are four national department stores that are new to the city, specialty shoppes and boutiques including national girls’ and women’s shoppes,” said Trezevant. “And there is planned space for two to three upscale restaurants included in the mix.”

Since then, Dick’s Sporting Goods has announced its plan to add a store to the development.

This is not the first time that Trezevant Reality Corporation has been involved in the city’s commercial expansion.

“We developed the center anchored by Walmart, which included 100,000 square feet of shops (Oxford Marketplace),” said Trezevant. “We brought in Chili’s and Zaxby’s as out-parcels. Oxford Galleria I followed and included several exciting retail businesses like Newk’s and Belk Department Store, which we also developed. The Loft and Rack Room Shoes were also part of this huge success story that also included Chick-Fil-A, Buffalo Wild Wings and PetSmart”

Development in Oxford has been surging over the last few years.

Lakyn Gibson, her grandmother and her uncle account for three of 57 homes on the property, and are concerned about where they are going to go or what they are going to do about having to move their homes, a process which could cost anywhere between $5,000 and $8,000.

“We’ve got three trailers out here,” said Bovee. “One is for my daughter and her kids, the one next door is for my brother and I live next door to him. We’ve been living together for 20 years, we eat dinner together every night, and now we’re going to have to split up.”

It costs around $210 to rent each plot of land that the trailers sit on, and an additional $40 a month for each trailer to pay for water. Paying the $250 rent each month is sometimes tight for the families, but it’s a small fee when compared to what’s to come.

The three families are currently renting a storage unit to help the packing and moving process and need to borrow money to move on. Some of the people living in the community are disabled or are on a tight, fixed income and cannot afford to move, either physically or financially, said Bovee.

“We asked Doug what was going on,” said Gibson. “He never answered us directly. He kept saying that when he knew something, we’d be the first to know, but he still hasn’t told us anything.”

Before the Ewing Park Community was put in its current location, the land extended into where Home Depot is currently located on West Jackson Avenue.

“That land was sold 11 years ago, and so Mr. Ewing (Doug and Donnie’s father) paid to have our home moved to where it is now because he was the owner,” said Gibson. “He reimbursed us for the move, and he made sure we were taken care of. Doug and Donnie aren’t as caring as their father. They haven’t even told us that we are going to have to move.”

After multiple calls, efforts to Doug and Donnie Ewing were unsuccessful. However, they told a Daily Mississippian reporter in December that they “have full-time jobs and families to look after. They are ready to focus on their own jobs and families without having to worry about the land as well.”

Desiree Hensley, assistant professor of law and director of the low-income clinic with The University of Mississippi’s Law School, said that there isn’t much that the tenants can do from a legal standpoint to protect their homes.

“The (residents) can live on the land and put their trailer there for their term,” said Hensley. “But once their lease ends, rents are very high in Oxford. It’s marketed to college students and there are no affordable housing plans in Oxford.”

Residents say that before Doug and Donnie became the property owners of Ewing Trailer Park Community, their father was its sole proprietor, known as Mr. Ewing.

“Mr. Ewing would’ve given the shirt off of his back to help out his residents,” said Gibson. “We’ve never had a set lease with him, we just paid on time each month, so when he passed away about 8 years ago we continued that process with his sons. Now his sons don’t treat us the same way, and we are living here without the protection of a lease.”

When the time comes for all of the Ewing Trailer Park Community residents to relocate, the options are very limited within the city of Oxford.

“Well, my brother is going up to Water Valley. He’s going to sale his trailer and move up there,” said Bovee. “Some people are moving in with their family, some are moving into the trailer park closer to Batesville. We are moving to the one in Oxford called Oxford Acres.”

With all of the speculation surrounding the construction of Oxford Galleria II and no authority figure to tell them what is going on, the residents affected are now living day by day, expecting the worse.

“It’s hard to leave each day to go to school or work,” said Gibson. “We never know if we are going to come home to a notice that we finally have to leave our home.”

Kendyl Noon is a student in the Meek School of Journalism and New Media and can be reached at kcnoon@go.olemiss.edu.