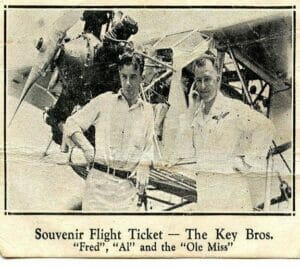 Brothers Fred and Al Key became interested in aviation after World War I. They started doing some barnstorming in the 1920s and continued their interest as the managers of the Meridian Mississippi Municipal Airport. But in June 1935, it was the heart of the Great Depression, and in Meridian the future of the new airport seemed uncertain. Al, 30, and Fred, 26, were co-managers of the field. So to earn the airport some valuable publicity, they decided to make aviation history by setting a record for endurance.

On June 4, 1935, the brothers lifted off in a borrowed Curtiss Robin monoplane named Ole Miss from Meridian, Mississippi’s, airport. For the next twenty-seven days, they flew over the Meridian vicinity. Several times each day, the crew of a similar plane would lower food and supplies to the brothers on the end of a rope, as well as supply fuel via a long flexible tube.

On July 1, the brothers broke the previous international endurance record as the crowd stared skyward and the Meridian Boys’ Band took its place just outside the hangar. The announcer over the public address system shouted “10, 9, 8, 7, 6, 5, 4, 3, 2, 1, –– they’ve broken the record!” The Boys’ band struck up Praise God from Whom All Blessings Flow.

Al and Fred had been flying for 653 hours and 34 minutes while traveling an estimated 52,320 miles and burning up 6,000 gallons of fuel. After the historic flight, Meridian’s public airport was renamed Key Field in the brothers’ honor. Their historic airplane, the Ole Miss, is permanently displayed in the National Air and Space Museum in Washington, D.C.

The Key brothers both served as bomber pilots during World War II, and Fred was awarded the Distinguished Flying Cross.

*Photo of Key Brothers w/ airplane from Miss. Dept. of Archives and History

*Photos of Al and Fred from Miss Air National Guard