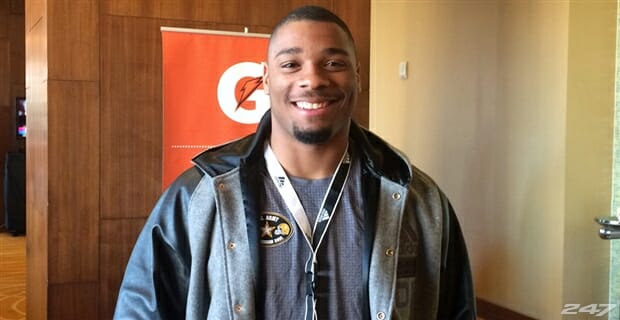 Five-star defensive end CeCe Jefferson of Glen St. Mary, Florida, may be changing his mind from playing for his home state to Mississippi and Ole Miss.
“Ole Miss, I would say Ole Miss is my top school right now,” Jefferson said. “Ole Miss is great man. Coach (Hugh) Freeze, what he has going is amazing. I took my official when they played Bama and it was like no other. They treated me well. The program’s great. The guys are great and I just know if I go there I’ll get taken care of and they’ll get me prepared for the next level and I’ll get a great education. And plus I know Coach Freeze is going to be there for a while, great stability.”
Jefferson’s decision could somewhat have been influenced by the contract extension of coach Hugh Freeze.
“When you get a relationship with somebody if you decided to go to their program, you want them to be there” Jefferson said. “You don’t want to start over, so that was definitely a big deal for him to turn down (the Florida) job and sign that contract. It means he’s dedicated to the program. He sees what he has. It’s a program on the rise. He wants to build something special, and I love that about him.”
In addition to Ole Miss, Jefferson has also visited Alabama and Cincinnati. He plans to take two more in January to LSU and Auburn instead of Florida.
Amelia Camurati is editor-in-chief of HottyToddy.com and can be reached at amelia.camurati@hottytoddy.com.