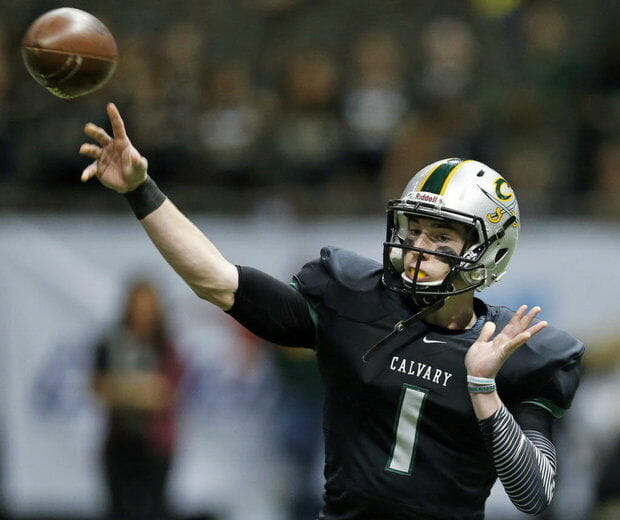 The Ole Miss Rebels landed one of, if not the, biggest commitment in program history today as 2016 five-star quarterback Shea Patterson (Shreveport, Louisiana/Calvary Baptist) gave his pledge to the Rebels at a press conference at his high school.

Patterson, ranked by Rivals as the No. 3 player in the country regardless of position, chose Ole Miss over finalists LSU and USC. He committed to Arizona, where his brother Sean was a coach, after his freshman season but reopened his recruitment in July. The 6’2, 195 Lb. signal caller also holds offers from Alabama, Michigan, Notre Dame, Oklahoma and Texas among others.

Many believed Patterson was LSU’s to lose as it isn’t often that out-of-state teams pry Louisiana’s top player away from LSU, with the Tigers signing the state’s best for the last three years. Another reason for their perceived lead was the hiring of Sean away from Arizona last year. The brothers are very close and it is rumored that Sean will be taking a new position at Ole Miss.

In 2013, Ole Miss signed five five-star players, including the No. 1 overall player in the country, Robert Nkemdiche. While Patterson is not No.  1 overall, though that possibility remains,  getting a player of his caliber this early in the recruiting cycle will be beneficial for the Rebels in more ways than one. Not only as the positional value greater than any other spot on the field, but having a great quarterback on board will attract top-notch offensive linemen and skill players. Patterson is also close to many top prospects from the state of Louisiana, which is loaded in the 2016 class with 10 players in the Rivals100.