December 15, 2014
1
1095
Many great individuals have graced Oxford, Mississippi and Ole Miss, but none greater than John Howard Vaught. This opinion may be shared by no one outside of this contributor, but please allow me to make the case. He’s the reason I migrated here 50 years ago and if the truth be known, thousands of others as well! 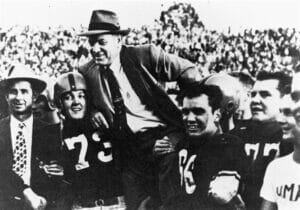 I am also going to go out on a limb in this column by saying that he is the greatest college football coach of all time.
This TCU All-American (1932 playing Guard) arrived in Oxford in 1946 as an assistant football coach. Upon his arrival Ole Miss ranked ninth in the all-time SEC football standings. When he retired in 1970, we were third. In 1947 (the year I was born) he was named head football coach. Ole Miss and Oxford would never be the same again.
Coach Vaught compiled a record of 190-61-12 while directing the Rebel fortunes. He would go on to win six conference championships and three national titles. He is the ONLY coach in Ole Miss football history to win an SEC football championship. In 18 bowl games, he won 10 including 5 Sugar Bowls, the last in 1970. We have not played in the Sugar Bowl since. He was named SEC Coach of the Year six times, twice after Bear Bryant arrived at Bama.
Coach Vaught also understood the importance of academics as he was Valedictorian at Polytechnic HS and an honor student at TCU. Prior to his arrival in Oxford he served his country in WWII as Lt. Commander in the US Navy.
Coach Vaught took a school (Ole Miss) with limited resources, no football history to brag about and a difficult place to “get to” in 1947 and turned it into a national power! Against two of the greatest football coaches of all time, Paul Bear Bryant and Robert Neyland, he went 6-7-1 and 2-3 respectively. These were the only two coaches who enjoyed winning records against Coach Vaught. I asked someone who knew him as well as anyone, former Ole Miss Chancellor Robert Khayat, to share his reflections on Coach Vaught. 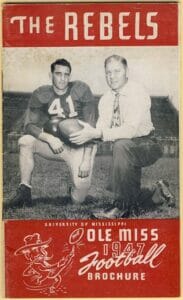 “He was a quiet, strong and thoughtful man. I believe that his leadership skills would have led him to success in any endeavor. Regarding football, he kept it simple on offense and defense and prepared to attack the weaknesses of any offense or defense where they were most vulnerable. One unusual habit was to “run the same play until the other team stopped it.
“He emphasized blocking and tackling and special teams. We were kicking field goals at Ole Miss as early as 1954. Very few college teams worked on the special teams to the extent we did. Finally, and maybe most important, was his emphasis on conditioning. Every practice ended with 20 fifty yard sprints. He also assembled a staff of coaches, some of whom could have been head coaches at any university in the USA.”
In conclusion, John Howard Vaught was born in Olney, Texas, on May 6, 1909. He died in Oxford at age 96 on February 3, 2006. Regardless of the outcome of the TCU-Ole Miss Peach Bowl in a few days, we can always be grateful to TCU for bringing us this incredible human being. Wouldn’t it be a wonderful gesture to have May 6 proclaimed every year as “John Howard Vaught Day” in Oxford! No individual is more deserving.