UPDATE — Early this morning a single bloom was found at the foot of the James Meredith statue on the Ole Miss campus that was vandalized on Sunday morning.  HottyToddy.com will have updates on the incident. 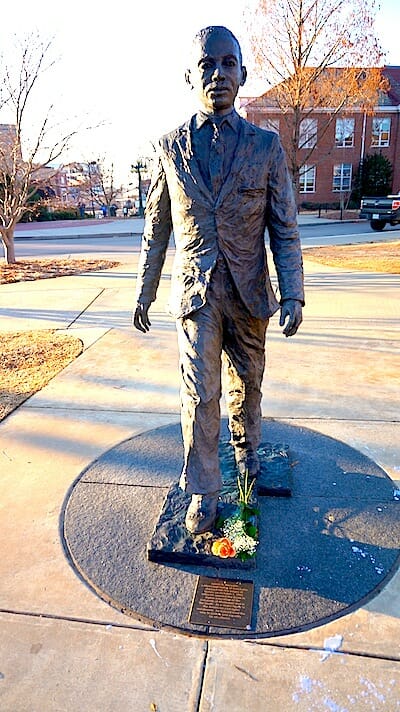 The Ole Miss Alumni Association is offering a $25,000 reward for information on the two suspects accused of hanging a rope around the neck of the James Meredith statue on campus and draping its shoulders with the confederate stars and bars. 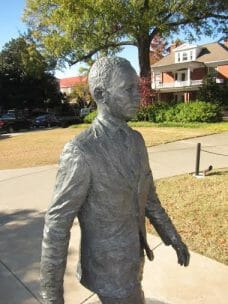 The statue, located between the Lyceum and the university’s library, was found Sunday morning around 7 a.m. by Mark McMillan, owner of an insulation company doing work on campus. McMillan said he observed two young white men in the area yelling racial slurs and proclaiming “white power.”
The flag found on the statue is a Georgia state flag that was the state’s official banner before it was changed in 2003.
University police are investigating the incident and checking video footage from cameras in the area.
In a statement Ole Miss Chancellor Dan Jones said: “These individuals chose our university’s most visible symbol of unity and educational accessibility to express their disagreement with our values. Their ideas have no place here and our response will be even greater commitment to promoting the values that are engraved on the statue — courage, knowledge, opportunity and perseverance.”
Dyamone White, an African-American student from Jackson whose minor is African-American Studies, said, “This is shocking. You never know if you could be sitting in class beside someone who might do something like this.”
Lacey Russell, a sophomore journalism student from Tupelo, said her first reaction was, “Oh no — not again. When something like this happens people think our state and our university have made no progress in race relations and nothing could be farther from the truth. Unfortunately, the news media will grasp something like this and the reputation of Ole Miss and Mississippi will suffer. With issues like, bigotry, racism and homophobia, we must continue to work to change the perception that occurs because of the despicable behavior of a few.”