Smashing barriers and lessons from the Dad on 'The Waltons'

Charlie Adams is an Oxford native, graduate of Lafayette High School and a member of the Ole Miss Class of 1985. Adams is a journalist, author, and motivational speaker.
One of the things I like to do here with the Tuesday newsletter and in motivational presentations is share timely inspiration. Building and keeping a positive and on fire attitude takes work, and part of that is learning of recent inspirational events. 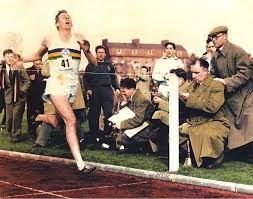 This past weekend I was in Indianapolis at the girls state swimming championships. A 12th grade swimmer for Penn High named Bethany Galat became the first girl in the history of Indiana to break the one minute barrier in the 100 breaststroke. Bethany took first with a time of 59.66.
Her accomplishment made me think of Roger Bannister. In the 1950’s most people thought it was impossible to run a mile in under four minutes. Many thought you would have a heart attack if you tried it. Most were negative about it. Bannister had a positive attitude and believed he could.
We often think we are so busy and that it’s hard to fit time in for exercise. I was at the gym the other day and saw this cartoon for the first time! 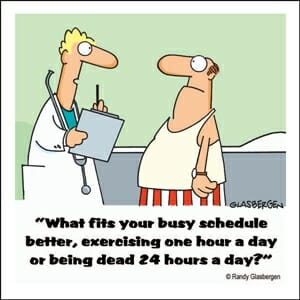 “What fits your busy schedule better, exercising one hour a day or being dead 24 hours a day?”
Bannister was a full-time medical student at St. Mary’s Hospital Medical School, and had only 45 minutes a day for training. On the day the British young man went for the record, a 15mph crosswind with gusts of up to 25mph meant that Bannister nearly called off the attempt. With 3000 fans cheeringat the Iffley Road track in Oxford hebroke the barrier at 3:59.4! He collapsed at the finish and had temporary color blindness, but he had done it!
What’s amazing is that the year after he did this, 37 other runners broke the four minute barrier! What barrier in your life are you close to smashing through? What about your team and organization?
The other inspiration I took from the girls state swim championship was about my 12th grade daughter Abby. A 4-year swimmer for John Adams High in South Bend, her goal had been to make it down to State with her relay teammates. She went one year as an alternate and last year her relay team BARELY missed qualifying. This year, in her last year in high school, she and her 200 medley relay team broke the school record at the Sectional level of State. They qualified for State, where this past Friday they rebroke the school record. While they didn’t win State, she had reached her goal of making it down there through hard work and dedication.

When I spoke in Fort Wayne yesterday at the team building event for iAB Financial, I described how their 200 medley relay team was like a team at the workplace.
Each of the swimmers specializes in a different stroke: freestyle, breaststroke, backstroke, butterfly. That’s like at the workplace. Everyone has their special skills that when meshed together can make a championship team.
Their relay team was made up of a 9th grader, 10th grader, 11th grader and 12th grader (Abby, far right in picture above). That’s like an organization. The 9th grader represents that young, new worker who is full of optimism and excited to learn. The 12th grader represents that worker in their 50’s or 60’s. Are they still positive about work or have they become cynical and waiting until retirement.
The picture above is a fun one. It is so important to work hard, but to also have fun together as a team. The John Adams High swim program has a special senior night every year. They put balloons in and traffic cones in the pool and have all kinds of wild and crazy races. They then break out the shaving cream and get each other and their coach. They celebrate their experience!
The other thing I took away is having watched my daughter for four years swimming, I always noticed that she did better in relay events. To me, it was because she loved being a part of a team and took more joy in accomplishing success as a team in medley events rather than in individual ones.
MORE TIMELY INSPIRATION!
In 1983, when I was a student at the University of Mississippi, some friends and I went to The Hoka, an art house movie theater/cafe in Oxford. Inside we were startled to see actor Ralph Waite, who was in town visiting his friend, writer Willie Morris (the writer in residence at Ole Miss). Waite died this past Thursday at 85. That night in Oxford, he could not have been nicer to us. Known as the Dad on The Walton’s, a poll of TV Guide readers of the “50 Greatest Dads of All Time” rated him No. 3, behind only Dr. Cliff Huxtable on “The Cosby Show” and Ben Cartwright on “Bonanza.” 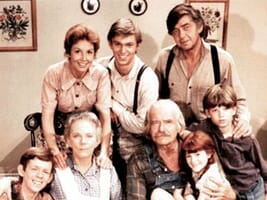 Besides his acting success he earned his master’s in divinity from Yale. He was ordained as a Presbyterian minister, and served congregations in NY.
The Waltons was not supposed to make it as it was launched against Flip Wilson’s show and The Mod Squad. Instead, it ended up sending them off the air.
Your team can learn from The Waltons. They made it through the Depression because of:

The Waltons impacted so many people. This is from part of a NY Times story on Waite’s passing:
Always, he was John Walton, the paternal voice of wisdom. He remembered a woman approaching him in a crowd and saying she was poor as a child and thought of him as her father. “I went to school and college because of you,” she said.
“She said, ‘Now, I’m a lawyer and I don’t think I would be if I hadn’t seen that show,’ ” Mr. Waite said. “I’m still amazed by that. It happens all the time. The whole thing is still amazing.”
As you and your family go to bed tonight, you might want to say good night to each other from every room….”Good night, John Boy…”
AND…MORE TIMELY INSPIRATION FOR YOU 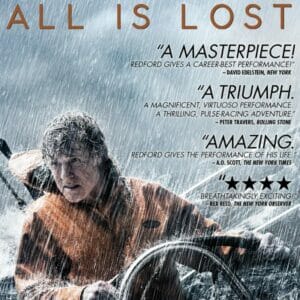 One of the things I speak about a good bit is the solution centered attitude. You may want to rent All is Lost, the recent film starring Robert Redford.
He awakens to find his 39 foot yacht’s hull has been perforated by a stray shipping container. He is in the middle of the Indian Ocean, hundreds of miles from land. He constantly comes up with one solution after another trying to stay alive. For example, since he is so far from land, he charts a course for the shipping lanes, hoping to be seen. I won’t say what happens, but it is an inspirational movie about never giving up and always seeking solutions.
What will also inspire you in this movie is the effort of Redford himself. Pushing 78, he does an amazing acting job and the physical exertion he put himself through in this movie is remarkable!
Stay positive and on fire this week!


Charlie Adams is the author of 4 books on positive attitude and peak performance, including 2013′s “How to Build a Positive Attitude and KEEP the Darn Thing!!” and “Stoke the Fire Within.” His books and motivational keynotes and seminars are designed to make sure events reach their objectives and to help create winning cultures. Email him at: Charlie@stokethefirewithin.com.
Facebook
Twitter
Pinterest
Previous articleOxford Podiatrist Makes World Better, One Foot At a Time
Next articleSmoky (and extremely tasty) Trails