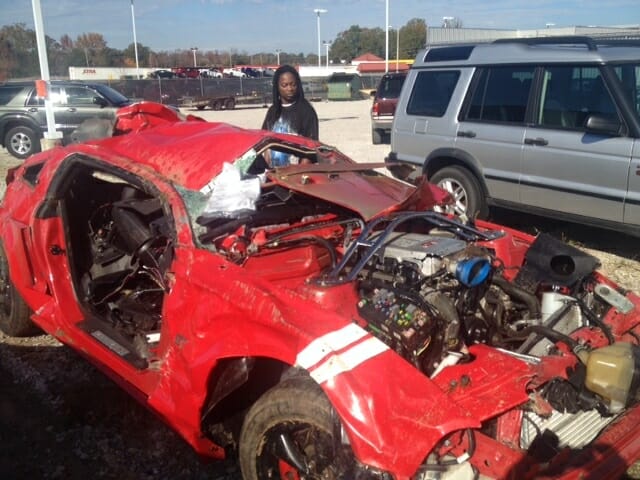 Kenneth Ivy, the wrecker driver who pulled away the Ford Mustang in which two Ole Miss students were killed and two injured, said the severely damaged vehicle was “certainly the worst wreck” he has seen of the four wrecks he worked this past week.
The red Mustang is hardly recognizable, except for the Ford emblem on the rear. Christopher J. Grimaud and Kevin J. Eagan of St. Louis were in the front seat and were killed in the crash . In the rear seats were Arthur Luekin and James Conners, also of the St. Louis area, both injured and taken to hospitals. Oxford Police Lt. Kevin Houston said Saturday night the accident is “still under investigation.” Houston said the Ole Miss students’ car, heading southbound,  went off the road on Highway 7, between Highway 6 and University Avenue around 4:45 a.m and flipped over.One student was taken to The Med in Memphis and the other to Baptist Hospital North Mississippi.

Although Lt. Houston said it is not known what caused the south-bound car to go off the road and flip, Ivy, who provides wrecker service through Chandler Motors and Nissan, said he was told the students had visited McDonalds on University Avenue between 4-5 a.m. Saturday morning. “They pulled up the ramp from University Avenue onto Higyway 7, heading South, and somehow lost control of the car which flipped and rolled to the median just before the red light at Highway 6,” Ivy said

Ivy said he was told by a police officer the car had to be going at a high rate of speed to cause such damage because of the short distance from the University Avenue ramp to the area of impact.  Although police say they won’t comment on alcohol involvement, Ivy said an officer told him “alcohol was involved.”
Oxford Police officer, Capt. Alan Ivy, (no relation to Kenneth Ivy) the duty officer on Sunday morning, was asked if alcohol was involved and said he could not comment. “Our policy is not to get any information except that released by Oxford Police Chief Joey East.” Chief East was unavailable for comment.
Waller Funeral Home Director Bob Rosson said an autopsy is always done in such cases. Presumably toxicology test will determine if alcohol was involved.
In addition to the four wrecks worked by Ivy, wrecker service owner Richard Shivers said his group had worked six accidents during the week.

Ole Miss Dean of Students Sparky Reardon said, “The University of Mississippi is shocked and saddened by this tragic incident.

HottyToddy.com will provide additional information when available.
The following video clip depicts where the fatal crash occurred in the median of Highway 7 at the intersection of Highway 6. On your left you can see the marks in the grass where the vehicle came to rest.
http://youtu.be/S8YBh8nmziM
Facebook
Twitter
Pinterest
Previous articleTwo Ole Miss Students Killed, Two Injured In Single Vehicle Accident Still Under Investigation
Next articleLady Rebels Drop Game to Central Arkansas