The Simple Virtuoso: an Interview with Sam Holt 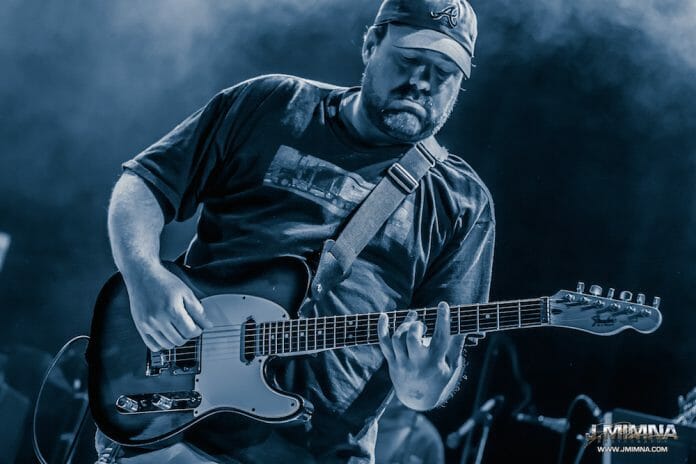 In the words of Hunter S. Thompson, “Music has always been a matter of Energy to me, a question of Fuel. Sentimental people call it Inspiration, but what they really mean is Fuel. I have always needed Fuel. I am a serious consumer. On some nights I still believe that a car with the gas needle on empty can run about 50 more miles if you have the right music very loud on the radio.”

I bet we can all think back at some point in our life and realize when we were first introduced to music and what an impact it had in our lives. Whether you were young or old when that moment came, we can all probably agree that it changed and fueled something inside of us.

We can all probably sit back and reminisce when we went to our first show whether it was in a big stadium or a small intimate venue where we might not have known who was playing but it was the spot to be. No matter what the case may be, it is no question that there’s something about the power of a musician and music that often does not need to be translated — it’s just felt.

Though a place like Oxford is quickly known for its athletic and college town reputation, it is easily becoming a melting pot for the arts, especially the music scene. There is plenty of inspiration that does not have to do with football and tailgates that make Oxford a hub for musicians new and established to flock to any night of the week.

Whether it is a Monday or a Saturday, there is always some type of good music that will get you out and ready to put on your dancing shoes. It’s so hard to pick and choose which shows and artists to spotlight because each one is deserving no matter what genre.

Each time I came to Oxford before I made it my home, there always seemed to be a reintroduction to a band called Widespread Panic. It was only natural to feature Sam Holt, longtime guitar tech of Michael “Mikey Houser” of Widespread Panic, when he came to town on his “Remembering Mikey Tour.”

Sam has also played with Widespread Panic before forming his own musical projects including the Sam Holt Band. I had the pleasure of watching Sam play a few times over the past two years, and each time he brings something new for his audience. Even if you’re not familiar with him or his music, it will not take long to be captivated by his sound.

At first glance it wouldn’t seem to be anything that would draw your musical attention, but that’s one of the things I enjoy about Sam and hooks new fans every show. Nothing fancy about his show or his demeanor, but that has nothing to do with his musical ability that grabs the attention of an audience when he plays.

As soon as his eyes close and he begins to play, you can tell he is in another world that transcends into ours and can take you to a real place for just a moment. It can be vocals, guitar or both, but just give it time and Holt’s simple virtuousness will have you hooked. If you don’t believe me, catch him on the road. For more information on upcoming tour dates as the Sam Holt Band or Remembering Mikey Tour, check out the band website.

When was the moment you realized you wanted to pursue a career in music?
The moment really came after Michael passed away. He told me I should be playing my own music and I believed it, but it really didn’t hit home until he was gone.

What kind of music and artists have inspired your musical evolution over the years?
The first music I heard was Elvis, the Charlie Daniels Band and Kiss. Some of the guitarists that have influenced me include toy Caldwell of the Marshall Tucker Band, Frank Zappa, Willie Nelson, D Boon of the Minutemen — that is a shortlist, but all those guys’ guitar playing speaks to me and Michael Houser.

How did you get involved with Widespread Panic and being Mikey Houser’s guitar tech?
Long story short, my friend became the production manager for Panic, and he called when they needed a guitar tech.

How did working with Panic and Mikey at the time influence you in your own musical endeavors?
The biggest influence was knowing Michael believed I could play guitar, and that gave me enough confidence to really pursue my own music.

What was it like having the opportunity to fill some pretty big shoes playing with Widespread Panic?
It was great. I had a good handle on most of the material and when the situation presented itself, I was ready.

What inspired you to create a tribute tour to Mikey?
We did a few of the shows in Colorado mainly on the anniversary of his passing and people from the South and all over really kept saying bring the show other places.

What is the best musical and life advice Mikey ever gave to you?
I don’t know if there’s one specific phrase or piece of advice. I think just watching him and being around him, he was kind a lead by example guy, not that he was trying to do that, and he just kind of did it and seeing him interact with the band and other people was really a lesson in how to treat people.

I unfortunately did not have the pleasure of seeing Mikey Houser with Panic, but it never fails that the shows I have been throughout the country that people say that Mikey had a sound that was unique. Being so close with Mikey and seeing his journey as musician with the band, what made his sound so unique and timeless?
I don’t know if I can put my finger on it, but he has such a different sense of timing and the way he could build momentum. His songwriting is very significant, and his songs reached a lot of people.

What can we expect during a “Remembering Mikey” Show ?
We will play mainly material that Michael wrote some for Panic and some for his own album, Sandbox. Also, we will play a few songs I have written there were inspired and written for him.

What made you choose Oxford as one of the stops for the tour?
We could get a gig there on a Wednesday.

I read in an interview that Oxford was the first place you saw Widespread Panic in the late ’80s. What do you think makes a place like Oxford such a melting pot for musicians like yourself to visit?
I think just being a college town people are impressionable and young and willing to experience things that may be older people have already experienced or are not open to.

Do you have any favorite spots you like to visit when you come to Oxford?
The Chevron for some chicken on a stick.

So when you’re not out on the road with the tribute tour or your own bands tour what kind of things do you enjoy doing?
I’m a new dad so that takes up most of my time. I also enjoy playing tennis.

Life on the road can be tough especially when you have family what keeps you motivated to continue to pursue music, touring and life on the road and how do you keep a balance?
My wife inspires me and supports me playing music, and without her I couldn’t do it.

For all those aspiring to get into the musical world whether it be songwriting, musician or behind the scenes what is your advice to them?
I heard Frank Zappa say that he would tell any musician two things: Keep going and don’t stop.