Seeing My Area Through the Eyes of Others

Although I love this wonderful Mississippi Delta, it is often through the eyes of someone else who doesn’t live here that really makes me appreciate – even more – where I was born and live.
Case in point:


For the last 37 years, my hobby has been playing a guitar. A few times a year, I will grab my longtime music buddy here in Cleveland, Barry Bays and we’ll perform in public with our Beatles’ “band”, Delta Skelter. A couple of times each year, we’ll also play with another friend of mine, Derek St. Holmes. Derek has been the singer for rock star/outdoors man, Ted Nugent for 35 years and they have sold 40 million records over the course of their band’s career. Ted and Derek have also played all over the world – many times. Derek now lives in Nashville, however, he was raised in Detroit.
Periodically, I’ll bring Derek to the Delta to perform somewhere with me and this past weekend we played at the annual Juke Joint Festival in Clarksdale. We played mostly blues songs. However, we ended our show with his and Ted’s song, “Stranglehold”. The crowd exploded when we played that song.
Derek arrived in Cleveland early Friday morning. He has been visiting me here for several years and while we have toured the Delta, showing him the sights and sounds, we have not explored Bolivar County.
Saturday, we began our day at the annual Crosstie Arts & Jazz Festival in Cleveland. Derek enjoyed that experience, viewing the artwork and purchasing some items in the various booths. At lunch we drove west to Rosedale which meant a great deal to Derek because one of the most significant blues musicians that ever lived, Robert Johnson, sings about Rosedale in a song he wrote in the 1930s called, “Crossroads”. Eric Clapton, Lynyrd Skynyrd and others have also recorded and released versions of this song.

Donaldson Point Hunting Club was our next stop and Derek was overjoyed riding through the beautiful woods there, some 10,000 acres of woods and many miles of dirt roads. He had never seen the levee and he was curious because like Rosedale, the Mississippi River levee is also mentioned in countless blues songs, most notably Led Zeppelin’s version of “When the Levee Breaks”. I told him how the levee protected us and I gave him an overview of the Flood of 1927.
We then visited the Mississippi River at Dennis Landing just north of Gunnison. While Derek has crossed over the mighty Mississippi many times, until Saturday he had never walked along it’s banks. We did as he picked up several unique pieces of driftwood. He was also surprised by the size of the river. The large barges that traveled by while we were there was an added bonus.
We then spent two hours walking the various Indian artifact sites in fields just outside of Shelby, locations I have been visiting since I was a child. Derek could not believe the Indian pottery shards we stumbled upon. Finding two arrowheads made his day.

We continued our journey down small blacktop and gravel roads passing by old shotgun houses, farms headquarters, fields, and much more …. all were of great interest to Derek.
We arrived back in Cleveland and drove around for a while often stopping so he could take photos and ask questions about our town and Delta State University. He was especially impressed with our downtown saying, “it looks like a Hollywood movie set.”
It has been my experience that people visiting the Mississippi Delta always leave with a good impression. We have so much to see and do here and because people like me have grown up around all of this, perhaps we don’t see it as clearly as we should.
Sometimes it takes someone else to show us what we have here in our special region of Mississippi. 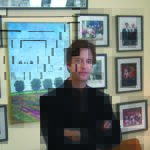 Scott Coopwood, a seventh generation Deltan, lives in Cleveland, Mississippi, with his wife Cindy and their three children. Scott is the publisher and owner of Delta Magazine, one of the South’s leading lifestyle publications, the Delta Business Journal, the first business publication in the Mississippi Delta; and Cleveland’s weekly newspaper, The Cleveland Current . Scott’s company also publishes two weekly e-newsletters. Coopwood publishing concerns now reach 250,000 people.  Scott is also a 1984 graduate of the University of Mississippi. He can be reached at scott@coopwood.net
Facebook
Twitter
Pinterest
Previous articleNWCC Transfer to Ole Miss Receives Highest Academic Honor
Next articleThree Quick and Easy Spring Cleaning Tips