Oxford singer-songwriter Tad Wilkes is living proof that good things come to those who wait. Some just have to wait a good while longer than they ever imagined.
After more than 25 years of honing his craft and polishing his riffs in local bars and cafés, Wilkes has scored his first win in a national competition, beating out more than 600 fellow tunesmiths for first place in the prestigious bimonthly American Songwriter Lyric Contest, sponsored by American Songwriter magazine.
“I still don’t really believe it happened,” said Wilkes, a longtime journalist and the Oxford-based editor of Hotel F&B Magazine.
Wilkes’ winning entry, “Be Good To Your Woman,” will be featured in American Songwriter’s upcoming March-April issue. It will also be one of six finalists for the magazine’s grand-prize competition at the end of 2018. 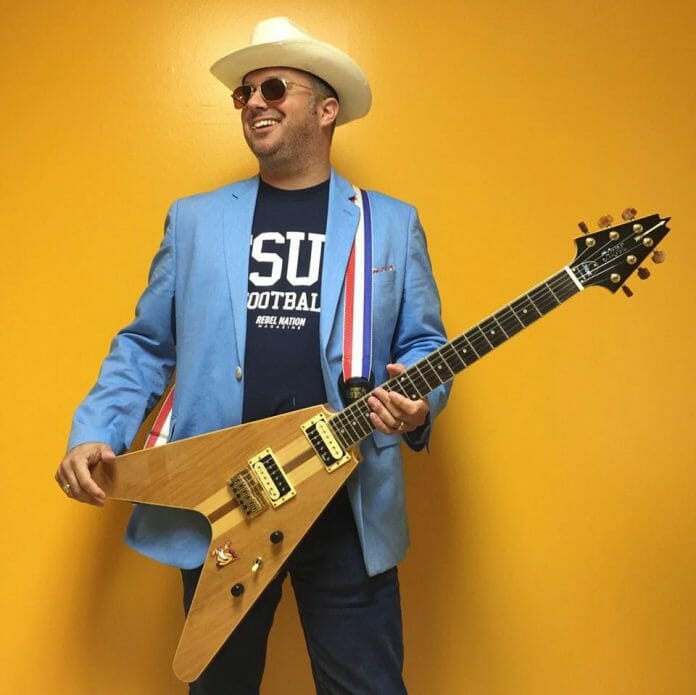 “I’ve entered their contest a few times in the past, but I never placed or anything,” Wilkes said. “You’re going up against songwriters from all over the country and maybe internationally. I had actually submitted a different song to the previous issue and didn’t get anywhere. I’m not even sure why I decided to submit another one. It was only a $15 fee, and I figured I could spend that. But I had no hope that I’d win.”
Wilkes received a new PRS acoustic guitar and a Sennheiser microphone, but the real prize is the exposure—including a Q&A interview with photographs—in one of the music industry’s top magazines. Recent issues have spotlighted acclaimed artists like Willie Nelson (the January-February cover subject), Chris Hillman, Kenny Chesney and Nicky Mehta of The Wailin’ Jennys.
The magazine’s lyric contests are judged by some of the leading songwriters in the business, including Charlie Worsham, whose album, “Beginning of Things,” was named one of the “25 Best Country and Americana Albums of 2017” by Rolling Stone; Grammy and Oscar nominee Allison Moorer; Taylor Goldsmith, the frontman of indie rock band Dawes; and Austin-based Slaid Cleaves, hailed by Rolling Stone as “Americana’s most underappreciated songwriter.”
“These are all songwriters’ songwriters,” Wilkes notes.
Like a lot of those masters of the craft, Wilkes’ own musical style defies easy labels. It owes a little bit to the likes of Guy Clark, John Prine and Kris Kristofferson and a lot to no one you’ve ever heard before. Peppered with raunchy wit and piercing self-deprecation, his songs manage to be intensely personal and universal at the same time, filled with longing and laugh-out-loud one-liners. Even the saddest and sweetest of his songs will make you guffaw when you least expect it.

His debut CD, “Enter the Fool,” released in 2015 and co-produced by his good friend and former songwriting partner Joshua Cooker of the Nashville-based Captain Midnight Band, features both a comedic paean to sexy soccer moms in yoga pants (“Your Mama and Them”) and a snappy, bluesy-rock rumination on the bitter aftermath of a failed marriage (“It’s Called Divorce”).
“Enter the Fool” is available for purchase at Apple Music and on Spotify.
The cleverly metaphorical and immensely catchy “Be Kind, Rewind,” meanwhile, portrays a doomed romance in terms of Hollywood artifice:
Remember the opening credits
We were both billed as stars
The director yelled ‘action’
And we made out in my car
But somewhere in the second act
The storyline went south
Some hack writer put some crappy dialogue
In my mouth
It all came out
And I don’t even know what I was talking about

It’s a style that Wilkes has been fine-tuning since he was a teenager. “In high school, I made up what I would call novelty songs—silly, juvenile kind of stuff,” he recalled. “Songs with titles like ‘Booger on the Bronco’ and ‘Eatin’ Dog Food.’ My friend Ayers Spencer and I had a band called The Dingleberries—I sort of dragged him into it.”
At Ole Miss, Wilkes and Cooker went on to form the hard-partying band Cardinal Fluff and began taking songwriting more seriously. “Josh and I started writing songs together—even though they were still funny, they were real songs,” he said. “We were serious about being funny, sort of like Frank Zappa. I got my first real acoustic guitar at that time and then started listening to old country music and writing my own songs.”
Delving into the roots of what would later become known as the Americana genre, he immersed himself in the works of country- and folk-music storytellers like Prine, Clark, Steve Goodman, Jerry Jeff Walker and Willie Nelson. He also absorbed a lesson or two from another master raconteur, his own father, the late Dr. Thurston Wilkes. “He could tell a joke better than anybody,” Wilkes recalled. “From my dad I think I learned to add a little humor to complement the darkness and the deep thoughts—or what qualify as deep thoughts for me, anyway. Like George Carlin or Richard Pryor, he chose every word carefully, knew how to put each word in exactly the right place with the right emphasis. The first line of any song is the first impression, so I always believed in having a great first line. You add a little humor to see if they’re paying attention. That’s what my dad would do—he would throw some off-color joke into the conversation just to see if you were listening.”

In Cardinal Fluff, Wilkes invented an off-color persona of his own, a bewigged, madcap character called Moon Pie Curtis, a name that he still performs under today (minus the wig and the wacky wordplay), while Cooker re-christened himself Captain Midnight. Cardinal Fluff lasted six or seven years, performing hilariously dirty-minded ditties with titles like “Position Impossible” and “Proud Totem.” But the bandmates parted ways when Cooker moved to New Orleans and then to Nashville, where the guitar-slinging Captain Midnight still fronts his own jam band and describes himself as “an internationally ignored superstar … (and) the world’s only purveyor of waterbed rock-and-roll.”
Wilkes, meanwhile, opted for a quieter, more domesticated life. “I thought, ‘Well, I want to have a family, so I should have a real job and keep living in Oxford.’ Songwriting was something I could still do here whenever I wanted. I figured it’s not like being a stand-up comic where you have to live in L.A. But, while that’s technically true, your chances of success in songwriting are much lower if you don’t live in Nashville and you’re not networking and co-writing and working with other musicians every day. I don’t think I really appreciated the magnitude of that at the time.”
Not that he has any regrets about opting for the joys of hometown domestication. He and his wife, Amy, have two adorable young daughters, and, in addition to his job with Hotel F&B, he founded Roxford University, a unique music school for children that offers both individual lessons in various instruments and a live-performance track, giving kids the experience of starting their own bands and putting on concerts twice a year. 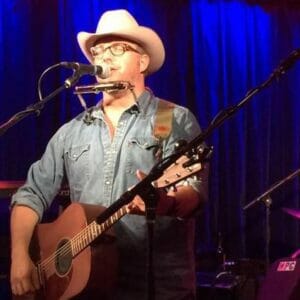 In the meantime, Wilkes’ songwriting and musicianship have continued to evolve and mature. “Be Good to Your Woman,” the song that won the American Songwriter contest, was inspired by a piece of advice given to him years ago by his grandmother on her deathbed. “She had heart disease, and even breathing had become painful for her,” he said. “One day she told me, ‘Make sure to be good to your woman because they think real deep, and they hurt real easy.’ That just stuck in my head for years. But it’s hard for me to write a song like that—something that’s so heavy and deep. That was a tall order.”
The last thing Wilkes wanted to write was some maudlin, cliché-ridden tear-jerker, so he took his time with it—a lot of time. “I thought the first version was the best song I’d ever written,” he said. “That was about 10 years ago. Then, I realized the second verse was throwing the whole vibe off-course. It reflected my own distinctly male point of view, and that wasn’t what I wanted the song to be about. I knew I had to redo it. Looking back, it’s probably a good thing that I put so much thought into this one song, making all those revisions. I guess I always thought somebody would hear it eventually, and I wanted it to be perfect.”
“Be Good to Your Woman” will likely appear on Wilkes’ next CD, which he plans to cut with Cooker later this year. Although Wilkes, in his Moon Pie Curtis gigs, usually plays solo and unplugged, full studio instrumentation and Cooker’s sure hand on the production side bring glossy new life to his tunes while preserving the raw, throbbing ache that lies just underneath the wryly funny lyrics.
And winning the American Songwriter contest proved that Wilkes can still get his songs heard in Nashville without living there.
“It means that I haven’t been wasting my time doing some silly creative endeavor all these years,” he said. “I don’t feel discouraged about writing songs anymore. Now I know I’m not just doing it for myself.”