The most conflicted war of my generation has been lost among Generation Y.

I never see service people in uniform that I don’t stop to thank them and their families for their sacrifices in defense of our democracy. Most are Vietnam vets, and that is one reason my wife and I took my grandson, John Hale Houston, to Vietnam, Laos and Cambodia.

It seems that this awful period of history has been given limited treatment in our textbooks. And, the North Vietnamese, according to my guide, have done the same thing. It is as though there is an effort to wipe the slate clean and forget that awful conflict, and thus those who sacrificed their lives on both sides.

One of the side trips made was to the Vietnam War history museum, the only evidence I saw in all of Vietnam that there was ever a war. Located in Hanoi, our young people touring the exhibit were blown away by what they saw and learned.

After visiting the museum, which was of course very biased, Hale was angry, very angry, as were the other young people. Not at Vietnam, but the United States of America. He had no frame of reference as he and other youngsters had so little knowledge of the conflict. We took time to give him the other side of the story and to assure he understood how conflicted our nation was and the great sacrifices made by so many,

Hanoi was demolished by our B -52 bombers, yet there is no sign the city had been involved in any conflict.

We walked the halls of the Hanoi Hilton where Senator John McCain was held, tortured and abused along with many other American soldiers.

We saw pictures on the walls of our hotel of Jane Fonda and other American activist who are seen as heroes in North Vietnam.

We crawled through tunnels an hour from Saigon. Miles of tunnels were hidden at the very south end of the Ho Chi Minh Trail and so extensive as to included housing, meeting, cooking facilities and even a hospital with surgery suite. This massive complex, located literally in the front yard of our base at Da Nang, was only discovered by Canadians 10 years after the war. Viet Cong moved freely in this underground city, slipping in and out at night to fight. 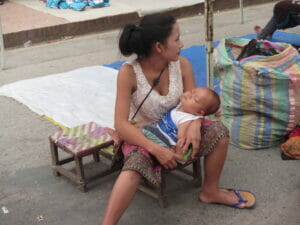 Vietnam, Cambodia and Laos are beautiful countries and the people are wonderful, hard working and innovative. They had to be, to survive many years of conflict involving the United States, the French and their own people. In Cambodia, an entire generation of 2.5 million people – any one educated or kin to anyone education – was murdered by a ruthless and misguided leader. Today, you see older people, mostly in their 80s, and young people up to about 35. The age group in the middle essentially does not exist.

All three countries have strong and growing economies. Tourism is a major growth factor. Vietnam was only opened up to the outside world 20 years ago. Now entire cities, built to support tourism, are bustling. In Laos, 80 percent of the GDP is tourism based.

Our guide, Tony, 34, only knew what his parents had told him, and he was not much better informed about the war than our young people. Like Americans, the post war generation of Vietnamese has moved on. Society on both sides have allowed the conflicting conflict to slip from the pages of history.

I found myself conflicted spending American dollars in an area that was so hostile to our efforts. I was never in the armed services but after talking to and coming to know so many American Vietnam vets, and learning of the horrors of that war, I felt guilty being there.

One American veteran I grew up with in Charleston, Miss., is Col. Charles Dewey Raney, who now lives in Arkansas. He lost more than 130 of the men in his company.

Before leaving Oxford, I arranged for a campus visit for Les Colegrove and his granddaughter to tour the the Meek School of Journalism and New Media. I called Les, a Florida native and close friend to my brother Larry, to apologize for not being in Oxford to greet his family. Les is a disabled Vietnam vet, and when I told him I was going to Vietnam, his response was penetrating: ”I hope your reception is better than mine was.”

I don’t regret this wonderful trip because at least a few of the current generation of young people, one very dear to me, now knows, will always remember, and be thankful for our service people and for the sacrifices they made for us. God bless them all, past and present.

Hopefully, the young people in our party learned war is not only hell, but  that there are no winners, only losers. –– Ed Meek, Publisher, HottyToddy.com