Always a joker, John Stitt can be spotted on campus wearing cartoon T-shirts, jamming out to Ke$ha and toting around a duffle bag filled with wrist wraps, chalk, lifting shoes and an extra leg.

Stitt is a competitive lifter who lost his leg following a motorcycle accident a few hours outside of Nashville. Stitt started lifting when he was 13-years-old. “One of my buddies invited me to lift with him after school,” Stitt said. “It seemed fun. And it was.”

“One of my buddies invited me to lift with him after school,” Stitt said. “It seemed fun. And it was.”

Stitt took his hobby further in 2012 when he entered his first powerlifting competition, but a year later in November, his life would change forever.

He had his goals in sight — then the accident happened.

“I remember seeing the truck, but the next three months are just bits and pieces,” said Stitt.

Stitt had owned his motorcycle for only a few months at the time of the accident, after which, he was airlifted to a hospital in Nashville where he was fighting for life and death for three months. The road to recovery for John has been a slow and difficult one. “If you had talked to me eight months ago I would be crying right now,” he said. “I went through some serious depression.”

“If you had talked to me eight months ago I would be crying right now,” he said. “I went through some serious depression.”

As a strongman competitor, Stitt competes in events that involve lifting cars and pressing Logs. It was his strength and ability to push through difficult lifts that he then used to help push through the challenge he now faced. 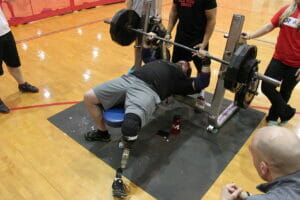 For Stitt, the journey to compete in the North America’s Strongest Disabled man competition has not been an easy one. Every weekday from 6 to 8 p.m., he can be found at the Ole Miss Turner center in the weight room either rowing on an erg or lifting at the racks.

“Nobody cared to talk to me when I was at the gym before, which was fine,” Stitt said. “Now people come up to me and just find things to talk about. Most of the time, it has nothing to do with my leg.”

As a type of gym celebrity, stories of how he lost his leg have reached extreme heights. One such story involves him crawling to the nearest phone booth after having created a tourniquet from his belt. Rumors of him taking a semi truck head on have given him an almost herculean mythos.

“The stories grow every time I meet someone new, Stitt said. It is kinda exciting to hear what people will come up with next.”

John even has his own nickname and logo for his trademark name: One-Legged Lightning.

“It started out as a joke because I was slow as molasses,” Stitt said. “No one knows where it started, but we all remember the punchline.”

One-Legged Lightning has become his alternate persona on social media. He uses the t-shirt and sticker sales to help fund his trips to competitions. Most recently, the funds helped pay for his trip to the North America’s Strongest Disabled man competition.

On April 18, Stitt took second place at the competition in the standing division. In his first strongman competition since the accident john placed he was able to complete a 160 overhead log press. Though he zeroed out on the car lift, Stitt has big plans for his future.

“I want to meet and surpass the goals I had when I had two legs,” said Stitt. “I never hit a 500-pound deadlift, so that is still something I have to do.”

John Stitt is truly the perfect example of a Strongman.

Chelsea Skinner is a Meek School of Journalism and New Media alum.