A Bollywood Production: A Flavorful Visit to Maharaja Indian Cuisine

Nestled in a shopping strip off Jackson Avenue sits one of the spiciest gems of Oxford. Maharaja Indian Cuisine has served Oxford residents authentic Indian dishes since 2007, when Madhu Ankisetty opened shop at 2570 Jackson.

Ankisetty came to Oxford from South India, bringing the best flavors with him. The brick storefront, green awning, and a canary yellow sign reading Maharaja Indian Cuisine marks the gateway to the cheapest trip for your taste buds. My experience began when I entered and met Lucky Attanayka, a man from Sri Lanka who moved to Oxford last.
“I came here because my wife is working over at the university,” he tells me. “She is getting her PhD in medical acoustics.”
I settle into my plush booth and scan over a menu full of dishes with names that sound like a tongue-tie rhyme. Before I had time to get overwhelmed, Lucky was there, at the ready to help with any and all questions I had.
After seeing my third question didn’t shake his patient demeanor, I figured he was used to Oxonians’ questions about the exotic dishes. There is a total of 77 foods to choose from, all of which I would need to Google to explain. Along with the seemingly endless list of mouthwatering mystery dishes, a Japanese hibachi menu was found discreetly placed on the back for those a little less willing to play the risky “you choose, Lucky” food challenge.
Vindaloo and Sitar, Too. I buck up and order the Chicken Vindaloo, extra spicy, and hope I pass as someone cultured and knowledgeable of exotic foods. I’m thrilled with my delivery of vindaloo and settle back into the booth thinking I’m the next Anthony Bourdain.
Lucky brings me back to reality when he delivers papad and green chutney to the table. It’s air puffed chips and a runny salsa-like dip. Delicious. The chips are very bitter and bland, but the chutney has just enough kick to remind you you’re experiencing the tastes of flavorful India.
By this point it’s impossible not to notice the two televisions in opposite corners playing today’s top hits from Bollywood. I become sucked into these music videos. The story lines are cheesier than a Nicholas Sparks novel, and the singers have more facial expressions than actresses in Spanish soap operas. It’s fantastic and now impossible to focus on anything else.
The video starts getting pretty steamy and I’ve almost eaten through my whole basket of papad when I make eye contact with the only other customer in the restaurant. It’s now a little awkward, because the man on TV jamming on the sitar is now undressing the damsel in distress with his eyes while she sings to him. After some awkward courtesy laughs about the restaurant’s complimentary entertainment, I decide to introduce myself to my future new friend, Torumoy Ghoshal. I move to his booth and learn he’s an exchange student from Bangladesh who believes American food has no flavor. Noted. 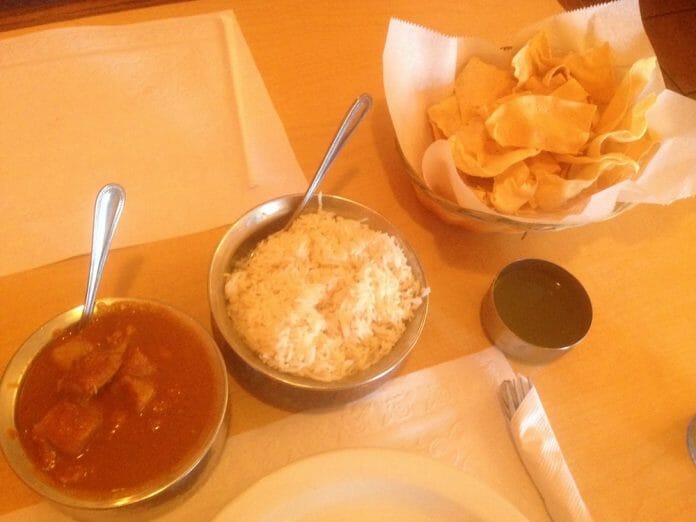 Tastes to Match Your Tongue “[Since] this morning, I felt like I should have something. I’ve been here for a little over one month, and I want to eat something with tastes that match with my tongue,” Ghoshal tells me.
He schools me on geography and notes there are different flavors of India depending on region. He explains Bangladesh has similar flavors, and Maharaja helps his nostalgia for food “with flavor.”
Lucky brings out my chicken vindaloo, so I head back to my table leaving Torumoy to enjoy the rest of his chicken biryani.
The menu lists vindaloo as “chicken in a tangy sauce with potatoes.” The meal is presented in metal pots that look like those Aladdin would eat out of. I’m thrilled. One pot is full of rice, while the other is filled with a brown, thick liquid full of chicken and potato chunks. I mix it all on my plate and go at it. It’s a burst of flavor. It’s a rich blend of spices unlike any other ethnicity of food. My sinuses are cleared, and my taste buds are awakened. I know realize I have to take back my argument against Torumoy’s claim on flavor.
I go into a food trance and stop hearing the autotuned sitar coming from the TVs. After I slow down and come up for air, I start realizing it’s a little hot. Really hot. Okay, no. It’s like the summer heat of India hot.
Naan Better I should’ve cooled it on the “extra spicy” demand, because by this point I’ve sucked down two glasses of water, and my eyes are profusely watering, making me look like I’m now not only eating alone, but crying alone. No worries. I bounce back by ordering a side of naan after Lucky comes to check on me. He looked concerned.
When the naan comes, I realize it’s a fun word for the Indian version of a tortilla that promises to forever haunt me during any future low-carb diets. It is phenomenal. India has now beaten out the French and their baguettes. This melt-in-your-mouth, warm, triangular slice of heaven is covered in butter or garlic, your choice, and serves as an excellent sponge for the delicious sauces of your entrée.


Lucky decides all my questions and compliments on Indian food are too much for a Sri Lankan, so he gets the chef, Srikanth Kanneganti, from South India, to step away from his art and come talk to me.
“They are our own recipes, we make them. I like everything because they have the fresh taste. It’s a mix of flavors…mostly southern and northern,” Kanneganti says.
Kanneganti has been the chef at Maharaja for a year and came to Oxford to help his friend Ankisetty with his restaurant. Before Oxford, Kanneganti lived in Las Vegas getting his masters in cooking.
“We do mild. Some people come in and say too spicy, so we have mild, medium, and spicy,” Kanneganti said.
After talking with Chef Kanneganti, I meet Abdullah Al-Siyini, an exchange student from Oman, a country in the Middle East that is used to the same flavors of India. He said he has been coming to Maharaja for three years to cure his craving for flavor.
I enjoy the rest of my food, dreaming of India, when a man with a thick Mississippi accent runs in, grabs his to-go order with a big smile and exits. I learn Maharaja not only does takeout, but they also deliver. That’s great, but you’ll have to YouTube Bollywood’s top hits and Google about Asia in order to get the unusual, diverse experience at home that Maharaja has to offer.
Sarah Douglass is a student in the Meek School of Journalism & New Media at Ole Miss
Facebook
Twitter
Pinterest
Previous articlePumpkin Pickin' in Oxford
Next articleMississippi Health Official Discusses Ebola Response Plan, Overhyped Threat