How would you like to make two business decisions that would mean no one in your family would need money for 220 future generations?
On a trip I took up the Mississippi River in November I learned of a man that did this, and of three other stories that will inspire you!
It was in the river town of Vicksburg, Mississippi that I learned of a 28 year old candy merchant that would make decisions that would lead to not one but two massive successes.
Joseph Biedenharn dropped out of school at age 14 and worked for his Uncle’s candy store in Vicksburg, taking it over at age 20 when his Uncle died. Joe added a soda fountain to the business in 1890. At that time Coca Cola was only available in soda fountains.

Biedenharn was so impressed by the growing demand for
Coca-Cola at his soda fountain that he installed bottling machinery in the rear of his store and began to sell cases of Coca-Cola to farms and lumber camps up and down the Mississippi River. He was the first bottler of Coca-Cola. He would forever reshape the soft drink industry.
Get this. He wasn’t done!
In 1925, Joseph was among a group that bought a crop-dusting business and added eighteen planes, then the largest privately owned fleet in the world. That company eventually became Delta Air Lines.
While I was in Vicksburg I visited the Coca Cola Museum there that honors what Biedenharn did by being the first person in the world to bottle a soft drink. As I was walking around, an employee from the Museum casually mentioned to me that “because of his business decisions no one in the Biedenharn family will want for money for over 220 future generations.”
I …. had never heard it put that way and don’t quite know how much that is, but I imagine it’s a lot!
Later on in this trip, upon reaching Memphis, I marveled at the remarkable story of how the St. Jude Children’s Research Hospital came to be.
More than 50 years ago young entertainer Danny Thomas was struggling in his quest to be in show biz. He and his wife had a baby on the way (that baby would be Marlo Thomas). One day, in a church in Detroit, he knelt in front of a statue of St. Jude and prayed for guidance.
He placed his last $7 in the collection box. With only a few coins left in his pocket, Danny prayed for a way to pay the looming hospital bills as it would cost $50 to have Marlo. The next day, he was offered a small part to play a toothbrush in a commercial that would pay 10 times the amount he’d given to the church. Danny had experienced the power of prayer.
A couple years later, with his career struggling, he prayed to St. Jude asking the patron saint of hopeless causes to help him find his way in life and he would later build a shrine to him.
Wham! His career took off. He starred in the network tv show “Make Room for Daddy” that was often #1 in the ratings.
He decided that the best way to thank the saint of the hopeless was to build a hospital to care for the most helpless of all: children with hopeless diseases. No matter how poor the child, he decided – no matter their religion, no matter their race – the doors would always be open. And to this day no child has ever been turned away because of a family’s inability to pay.
Talk about an ongoing miracle. It costs $1.8 million a day to keep St. Jude going, but they do thanks to donations.
In the 1950’s Thomas began the crusade that would lead to St. Jude opening in 1962. Once he drove to 28 cities in just 32 days to raise money for the new children’s hospital. 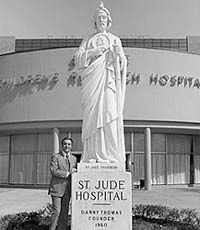 St. Jude has developed protocols that have helped push overall survival rates for childhood cancers from less than 20 percent when the hospital opened in 1962 to 80 percent today.
In 1962, the survival rate for acute lymphoblastic leukemia was 4 percent. Today, thanks to research at St. Jude, it is 94 percent.
I had a chance to interview Thomas one on one in 1983 and talk with him about his hospital. What an amazing story of how it came to be.
My final inspirational story to you from this trip down South also comes from Memphis, which is the home of FedEx, which was founded by Fred Smith.
When he was at Yale, he wrote a paper for an Econ class where he laid out the concept for overnight package delivery by air freight.
He did not get a good grade, as the professor wrote that his idea was not feasible.
It turned out it was…
Below is a short video I recently produced that takes you through Memphis and shows you more about Danny Thomas and his prayers to St Jude, as well as the Lorraine Motel, where Dr. King was assassinated. From that location and experience, they have made a great positive come from it…


–Charlie Adams is a 1985 graduate of Ole Miss and is a native of Oxford. He is also the author of 4 books on positive attitude and peak performance, including 2013′s “How to Build a Positive Attitude and KEEP the Darn Thing!!” and “Stoke the Fire Within.” His books and motivational keynotes and seminars are designed to make sure events reach their objectives and to help create winning cultures. Email him at:Charlie@stokethefirewithin.com.