Would Cochran Have Retired If He Had Seen into the Future?

Like most Mississippians, I had hoped that the nasty, mean-spirited Cochran versus McDaniel campaign would be over on the night of the first primary on June 3. Of course it wasn’t. It extended for another three weeks until the June 24 runoff. That wasn’t the end, either, as the charges and counter charges, mostly by Chris McDaniel and his supporters, have continued on an almost daily basis.

Several times during the current campaign I thought about 1982 when Sen. John Stennis, 81 years old at the time, was challenged by upstart Republican Haley Barbour. Barbour was considered a serious political challenger to Stennis, although it would be more than 20 years later in 2003 when Barbour would win the first of his two terms as governor. Stennis, despite his age, which Barbour made an issue in 1982, trounced his Republican opponent, 64-to-36 percent.
When Barbour was on the Gulf Coast campaigning, I took him to meet a friend of mine who was a prominent businessman and local elected official. He liked Barbour, was impressed by him, and said he would vote for him if he was running against anyone else but John Stennis. Stennis had that kind of respect and regard by the people of this state. I remember thinking at the time that voters would have cast their ballots for Stennis if they had seen his casket passing by on their way to the polls.
For many years I figured Thad Cochran, a true gentleman and decent individual who will turn 77 this December, would be regarded as the same kind of statesman as Stennis. But these are different times, and although Cochran is younger than Stennis was when he soundly defeated Barbour, this 2014 campaign was far different than the one of 1982.
If at the end of last year when Cochran, somewhat reluctantly, decided to seek re-election, I have little doubt he would have retired if he had somehow seen into the future about what his re-election campaign would be like. Many of his longtime and most influential supporters urged Cochran to not retire. If the truth be known, some of those urging him to run again were also motivated by their own self-interest.
If Cochran had retired it would have been a political free-for-all for a rare open U.S. Senate seat. A lot of names were mentioned but the most prominent were Secretary of State Delbert Hosemann, State Auditor Stacey Pickering, Lt. Governor Tate Reeves, and U.S. Rep. Gregg Harper of the Third Congressional District. Frankly, I don’t really think that state Sen. Chris McDaniel would have been a strong contender if Cochran had retired.
Hosemann very much wanted to run for the Senate. At one point he was telling key supporters and potential campaign contributors that Cochran was not going to seek re-election and that he would be a candidate. Hosemann even made some noise about a primary challenge against Cochran if Cochran decided to run.
Hosemann also has a clock ticking in the background. Hosemann, if elected to the senate, would have been 67 years old when he took office. With seniority being important to a small state like Mississippi, I find it difficult to believe that Mississippians would elect a 67- year old freshman to the U.S. Senate.
Pickering made no bones about his desire to run for the Senate. He also made clear that he would only run if Cochran retired, but if Cochran sought re-election he would have Pickering’s support. I don’t feel that Pickering would be as a strong a candidate as perhaps he and some of his supporters think he would. While Reeves was mentioned as a possible candidate, I don’t think he would have run.
Harper may have been the strongest of the four. Unlike Reeves, Hosemann, and Pickering, Harper has not be a statewide candidate, but his congressional district runs from Starkville in the northeast to McComb in southwest Mississippi. It includes Republican strongholds Madison and Rankin Counties. Harper has also quietly been building a statewide base in populous areas outside of his district.
But the sad footnote to the 2014 campaign is that Thad Cochran probably should not have run for re-election. He deserves a better fate than what has happened since he decided to run for a seventh term in the U.S. Senate.
[dhr]
For almost 20 years, until 1990, Wayne Weidie wrote “The Political Scene,” which was distributed to 16 daily and 27 weekly newspapers in Mississippi. He now returns to political commentary with the Weidie Report. 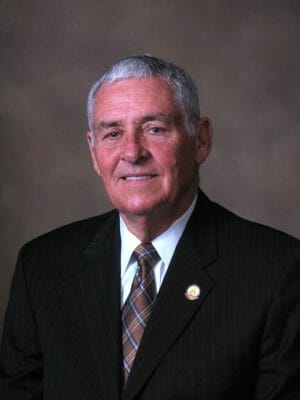 Weidie was born in New Orleans. He graduated from Pascagoula High School and Mississippi State University. He also attended graduate school at LSU, was a Fellow at the Millsaps Institute of Politics and was twice a Fellow of the American Press Institute in Reston, VA. After working in his father’s business, for 20 years he served as editor and publisher of the Gautier Independent and Ocean Springs Record, which most of that time were Gannett Company newspapers.
From 1972 to 1990 he wrote “The Political Scene” column. During his newspaper career he served as treasurer, vice president and president of the Mississippi Press Association. He also served on the journalism advisory committee and the telecommunications advisory committees at the University of Mississippi. Weidie has lectured at Harvard’s John F. Kennedy Institute of Politics. For three years he appeared each week on highly rated “Newswatch This Week” for ABC affiliate WLOX-TV in Biloxi.
In 1990 Weidie moved to Washington, D.C. where he served for 14 years as chief of staff for U.S. Rep. Gene Taylor. In 2004 he joined the Washington office of the law firm of Adams & Reese LLP as a senior governmental affairs advisor. After five and one-half years in the firm’s D.C. office, he returned to Mississippi in the Jackson office of Adams & Reese until his recent retirement. During six of those years he was the practice team leader firmwide for the governmental relations team.
Weidie’s journalism and political papers are part of the Journalism and Political Research Collections at the Mississippi State University Library. He also serves on the advisory board of the Stennis Institute of Government at MSU and was a participant in the Bill Collins lecture series at the university.
Weidie is married to Kim Wolford and has three children, Stuart, Courtney Lea, and Kyle.