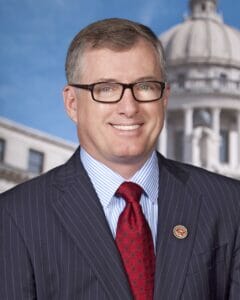 At issue is Article 4, Section 59 of the Mississippi Constitution of 1890, which requires all bills be fully read before they are voted upon. Historically, the House Clerk has personally read each bill aloud, in its entirety. However, in the last few years, an electronic device was purchased at taxpayers’ expense to automatically read the bills aloud. The reading procedure has been invoked each year as long as members can remember.

This session, however, Speaker of the House, Phillip R. Gunn, has accelerated the reading speed to the highest possible level on the machine, which reads the words faster than any human ear or mind can even arguably comprehend, or about 10 words per second. Despite multiple pleas from representatives on the House floor today before the taking legal action, Speaker Gunn declared that the Constitution said nothing specifically about being able to understand the bills, and refused to slow it down as it has always been.

“Right is right and wrong is wrong,” said Hughes. “This is no different than a bully on a public school playground.” Hughes paraphrased established Supreme Court law: “The government has been emphatically termed a government of laws, and not of men. It will certainly cease to deserve this high appellation if the laws furnish no remedy for the violation of a vested legal right.” I can think of no greater rights than those set forth in our Constitution.

In his post to constituents, Hughes said: “Silence is consent. Today I chose to speak – for the MS Constitution and its people. We must respect the law. I cannot sit by and watch legislation harmful to education and the people just evade the entire process.”

A temporary restraining order was granted to require bills be read at a normal rate of speed, and audio. The hearing on a permanent injunction is Monday, at 9:00 am, in the Hinds County Circuit Courthouse before Judge Winston L. Kidd.