The blues genre has its roots deep in the heart of Mississippi, planted by great musicians past and grown to produce dirty, raw, amplified emotional sound that affects every modern music genre.

One Michigan native has dedicated both her musical talents and her love of blues history to preserving the art of old school blues and swing music. This young woman’s personal connection to music stemmed from constant exposure to jazz, blues, swing, and funk music at an early age.

“Blues always seemed to give me an avenue and an outlet to express myself in uninhibited ways. It just really resonated with me more than anything else I have ever encountered,” Ole Miss graduate student, Alicia Marie Venchuk said. “They were the first genres that really spoke to me. It just appealed to my ear.”

Venchuk is a solo artist who is an acoustic and electric blues finger-picker.

“I started playing guitar around the age of nine or 10. I saw BB King playing on a PBS documentary talking about his vibrato being like a butterfly, and that really inspired me to want to pick up the guitar,” Venchuk said.

Venchuk became interested in blues around the age of 11 or 12. After picking up a blues backing track, which is an audio recording of instruments that allows musicians to hone their lead skills or practice their favorite licks.

“I enjoyed jamming to those tracks so much. I started to immerse myself in the genre,” Venchuk said. 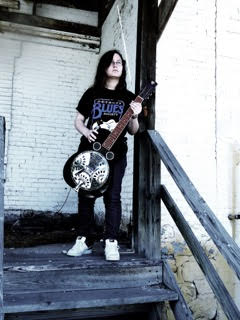 Venchuk learned from a combination of self-study and lessons.

“For the past eight years, I have been self-taught. I don’t like learning things note for note, so I always try to capture the essence of something or make it my own. I put a lot of emphasis on improvisation, exploring, absorbing, developing my ear, and learning through jamming or listening,” Venchuk said.

Along with her guitar playing, Venchuk sings popular blues tunes.

“Gosh. Even when I was 16, I still had some trepidation about singing in public, especially with a band. I have never had that kind of trepidation with my playing, so it was an interesting thing to deal with,” Venchuk said. “But as I sang more, it became a lot easier.”

“I always try to play old-school. I never play with any pedals. I am interested in playing clean, playing in a minimalist style like my idols, playing as smooth as I can,” Venchuk said.

Venchuk aspires to be like the great female blues artists that came before her who had the “resilience and drive to be one the greatest guitar players in a male dominated field.”

“I feel like I aspire to be most like Bonnie Raitt because she’s an excellent woman blues guitarist. She carries herself with a lot of class on and off stage, and she plays and sings in a minimalist style that I enjoy,” Venchuk said. “I went to one of her concerts and she said, ‘This is all you are going to get,’ and I loved that. No flashiness, no stage gimmicks, just pure, organic soul, and that’s what I really like about her.”

“I listen to these guys all the time to get inspiration,” Venchuk said.

Venchuk said she names her guitars on occasion, such as her 1986 Guild X-500 named Big Red and a Fender HSS Strat named Idlewild. But, she said there are two things one should never question a female about.

“Don’t ask a lady her age or how many guitars she has,” Venchuk said.

Venchuk is also the guitarist and vocalist in two bands: RJ Spangler’s Kansas City Six, and her blues trio, Big Al and the Brothers of the Blues.

In March of 2014, Venchuk was contacted by RJ Spangler about being in the band.

“Of course, I was ecstatic, honored to be asked, and I agreed, and we’ve been gigging ever since.” Venchuk said. This was the first band where I got to play old school blues and jazz with sultry horns and a swinging rhythm section fronted by a great singer.”

Venchuk also formed Big Al and the Brother of the Blues, made up of herself, bassist and vocalist Kevin Knudsen, and drummer Ryan Knudsen.

“I was floored. I couldn’t believe it,” Venchuk said. “When I went out and got the magazine, I was staring at the page in disbelief. Being recognized by this major rock player and being in contact with him was surreal.” 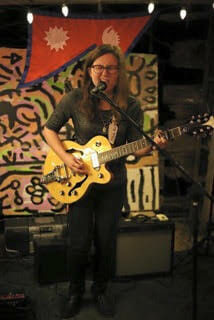 Venchuk made sure to factor in her admiration of blues music with her decision to come to Ole Miss.

“My love of blues music and my love of researching blues music greatly influenced my decision to come here. One of the initial reasons I applied to Ole Miss was because Adam Gussow is on the faculty, and he’s a professor who specializes in studies of the blues,” Venchuk said.

Venchuk is currently pursuing her PhD in English.

“I applied because I wanted to come to a school where I could do my blues literary work, especially my research on women blues guitarists and their lyrics,” Venchuk said. “I felt like I could be comfortable here and do my research amongst a great, supportive faculty. Plus, Ole Miss has such an extensive Blues Archive. Records, publications, you name it, they have it.”

Venchuk hopes to become a professor and play music on occasion.

“I would like to make CDs here and there and play at some clubs and festivals. I would also love to do lectures on blues music and lyrics, and it would be cool to combine that with performing,” Venchuk said.

Venchuk said Oxford is a great place to pursue her musical interests because of all the various musical styles around the city.

“Nearly all of my idols are from Mississippi, so coming to Mississippi was like coming to the promised land. This is a place with an incomparable music history, and I want to soak up all the cultural vibes I can,” Venchuk said.

Venchuk said that while both Ann Arbor and Detroit, Michigan have strong blues interests and musical communities, Mississippi seems to have a higher regard for every aspect of the blues.

“Blues seems to be a music embraced by nearly the whole state. It’s very much a part of the history and culture here. I realize that when I walk into a bunch of restaurants on the Square in Oxford and hear my favorite blues songs being played as background music,” Venchuk said. “I’d never experienced that before, and I just thought that was super hip. Plus, you guys have BB King’s guitar on your license plates, all the juke joints, all the history and mojo. So, I feel like the blues is embedded in the culture here.”

Cambria Abdeen is a HottyToddy.com intern. She can be reached at cdabdeen@go.olemiss.edu.