The Astrology of Wine: Your House or Mine?

Editor’s Note: This is an excerpt from author John Hailman’s book ‘The Search for Good Wine’ which will be available for purchase October 2014 from the University of Mississippi Press. This particular chapter was written on July 9, 1989.
Do you believe in astrology? I never have, but in an effort to leave no stone unturned in helping people select wines, I have recently consulted that New Age art for advice on matching wines with people. Before trying it on strangers, however, I tried it on my wife – a Leo.
For those conversant with such things, Leo is a “fire” sign and rules the fifth house – that of pleasure and the arts. Its favorite meats are said to be lamb and caviar. Is caviar a meat to anyone but vegetarians? By way of matching, the best wines with lamb are red Bordeaux and the best with caviar are Champagnes. Is it a coincidence that those are among my wife’s favorite wines and foods?
Testing the theory further, I checked out my own horoscope, which is somewhat more complicated, being Pisces the Fish on the “cusp” or influential rim of Aries the Ram. This odd mix of opposites of a water sign like Pieces and a fire sign like Aries sounds schizophrenic, but their tastes could complement each other – how should I know? Fortunately, Pisces does not limit itself to drinking water alone. The influence of the planet Neptune allegedly pushes it to enjoy all liquids including wines, especially exotic and unusual ones like Sauternes and Bonny Doon of Santa Cruz.
Aries people, by contrast, like to spend money and impress others. They’re often label buyers and, again, prefer Champagne. So far as I can tell, my wife and I would be forever happy together drinking expensive Champagnes. But then, who wouldn’t? 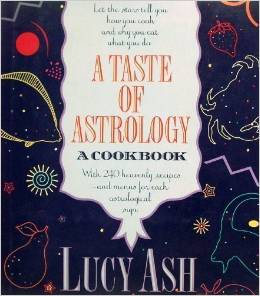 I’m not making all this up. Much of it comes from a recently published book called A Taste of Astrology by Lucy Ash. The book is devoted mainly to food, but each of the 12 chapters, corresponding to the 12 houses, has suggestions for wines to go with several astrological recipes.
These “Wines of the Zodiac”, as it were, have such a flattering tone toward all signs that whichever one you read you would like to believe is about you.
Taurus, for example, is earthly and would probably like a good Rhone red and perhaps a petit sirah from California. Scorpio, the sign of my second daughter, is said to be a gourmet and perfectionist, who would like a really find burgundy. The air sign Gemini, that of my first daughter, enjoys constant motion, change and excitement, especially through talking. Why does this stuff sound so believable? Such characters are said by Lucy Ash to prefer light meals with wines to match, so for Geminis, I suggest a nice, inexpensive Muscadet from the Loire with fresh trout.
What goes with green cheese?
It was only when I reached the chapter on Cancer, house of the subconscious, that my doubts about all this began to crystallize. Cancer, a moon sign, is said to like wine because it likes all liquids do to lunar influence. Okay so far, but would you believe they are supposed to like white wines because white is the color of the moon? White wines are actually yellow, but no matter. And do Cancers really like reds, whites and roses equally “because there are three phases of the moon”? Come on.
After a diligent effort to believe in astrology as a new source of wine knowledge, careful study has convinced me that it is probably a bunch of hooey. Nevertheless, if you have trouble choosing the right wine, you can always let the starts decide and relieve the pressure. Different wines for different signs? Why not?
[dhr]

John Hailman of Oxford is a regular contributor to HottyToddy.com on two subjects: Law and Wine. Now retired from both his “day job” as a federal prosecutor in Oxford after 33 years and his “night job” of 25 years as a nationally syndicated daily columnist in more than 100 daily papers on wine, food and travel for Gannett News Service and the Washington Post, Hailman will cover both topics under the titles of The Legal Eagle and Wine Tips of the Week. HottyToddy.com will also run periodic excerpts from Hailman’s upcoming book of humorous legal stories, From Midnight to Guntown: True Crime Stories From A Federal Prosecutor in Mississippi. Hailman now teaches Federal Trial Practice and Law and Literature at the University of Mississippi.
[dhr]