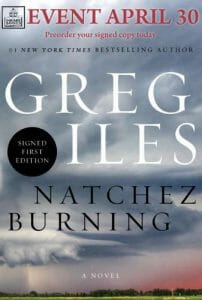 An ole Miss grad who has published 13 novels will be at Off Square Books tomorrow at 5 p.m. for a book signing of his new novel Natchez Burning.
Greg Iles was born in Germany in 1960, but grew up in Natchez, Miss.
Iles was born in Stuttgart, where his physician father ran the U.S. Embassy Medical Clinic. Raised in Natchez, this is the setting of many of his novels.
After attending Trinity Episcopal Day School, he graduated from Ole Miss in 1983.
Iles spent several years as a guitarist, singer, and songwriter in the band Frankly Scarlet. He quit the band after he was married and began working on his first novel, Spandau Phoenix, a thriller about Nazi war criminal Rudolf Hess. Spandau Phoenix was published in 1993 and became the first of twelve New York Times best sellers.
In 2010 The Devil’s Punchbowl reached #1 on the Times list.
Iles has published 13 novels in a variety of genres. His books have been translated into more than twenty-five languages and published in more than thirty-five countries worldwide.
Some material courtesy of Wikepedia.