January 8, 2018
0
777
The Oxford Film Festival (OFF), to be held Feb. 7-11, unveiled the full schedule for its 15th anniversary edition today, boasting the most films ever screened in the event’s history.
Get ready for some big numbers: 204 films. That’s 35 features and 169 shorts and music videos, including 29 world premieres and six U.S. premieres.
Given that the Oxford Film Festival occurs right after Sundance, that’s an impressive number of world premieres. It keeps Oxford on the map as a true “discovery” festival and national industry leader, noted OFF director Melanie Addington. In addition, more than 60 female filmmakers directed or co-directed this year’s films, as part of an initiative to provide more opportunities and more platforms for female filmmakers to have a voice.
“This year we’ve struck a wonderful balance between films that are thoughtful, provocative, reflect the world we live in, and address the issues of the day without blinking, with films that are just pure, fun entertainment,” Addington said. “The festival continues to increase in size and scope, and that growth can also be seen in the work of our local Mississippi filmmakers, whose exceptional work continues to impress. This year’s festival includes 18 films from Mississippi artists, the most to date, and they will be highlighted right next to the best films we could find from all around the world.”
On opening night, writer/director Adam Rifkin, known for such Hollywood hits as “Detroit Rock City” and “Small Soldiers,” will present his latest effort, “The Last Movie Star,” starring Burt Reynolds and Ariel Winter. Reynolds portrays a former box-office king, who, many years later, is invited to receive an honor at a film festival that turns out to be quite dubious. Instead, he opts to go on an impromptu road trip with the sister (Ariel Winter) of one of the festival’s organizers.
“The Last Movie Star” screens at 7:30 p.m., Thursday, Feb. 8, at the Gertrude C. Ford Center (351 University Ave.).

The festival’s Centerpiece Selection is a drama titled “Allure,” starring Evan Rachel Wood as Laura, a woman struggling to re-establish her life and meet someone as she continues to recover from past abuse. There seems to be hope when she meets Eva, a young, talented pianist disillusioned by the life her mother imposes upon her. As Laura become increasingly obsessed with Eva, she convinces the girl to run away with her, and they soon find themselves caught up in an intense relationship that can’t be sustained.
Directed by Carlos and Jason Sanchez, “Allure” screens at 8:45 a.m., Saturday, Feb. 10, at the Malco Commons (204 Commonwealth Blvd.). 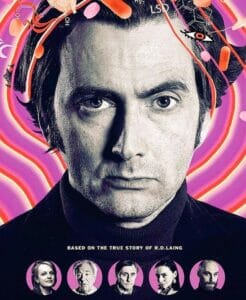 The festival’s closing film is traditionally something special, and this year is no different. Robert Mullan’s biopic, “Mad to be Normal,” stars “Jessica Jones” and “Dr. Who” star David Tennant as R.D. Laing, a radical psychiatrist who rewrote the rules on mental health treatment. He became a 60s counterculture hero for challenging the status quo of pills and electroshock therapy, instead opting for a holistic treatment without drugs, group therapy and communal healing. The film’s impressive cast also includes Elisabeth Moss, Gabriel Byrne and Michael Gambon.
“Mad to be Normal” screens at 6 p.m., Sunday, Feb. 11, at the Malco Commons.
But wait, there’s more. Two of OFF’s special events directly address issues that concern women and are currently at the forefront of society today. Daytime television legend (“All My Children”) Cady McClain’s documentary, “Seeing is Believing: Women Direct,” will screen on Friday, Feb. 9. It will be followed by a panel featuring several female filmmakers who will discuss the myriad issues in the news this past year regarding female filmmakers and women in general.
Saturday sees the Mississippi premiere of Trish Adlesic and Geeta Gandbhir’s award-winning HBO documentary, “I Am Evidence,” produced by “Law & Order: Special Victims Unit” star Mariska Hargitay. It addresses the tens of thousands of unprocessed rape kits across the country. The screening will be followed by a panel discussion with the filmmakers and special guests.

“Given the recent and continuing avalanche of sexual harassment and assault revelations in almost every area of society,” Addington said, “we felt it was important that the issues raised in these two films, as well as others in this year’s festival, be highlighted and discussed in our community.”
Providing a reminder that the Oxford Film Festival also has fun on its mind, Saturday will feature a 20th anniversary screening of David Zucker’s cult comedy favorite, “BASEketball,” starring “South Park’s” Trey Parker and Matt Stone. The screening will feature an appearance by cast member Dian Bachar and an actual BASEketball tournament in the parking lot of the Malco theater in conjunction with the screening. You can sign up here to play in the tournament.
For the OFF’s full lineup and more information, visit the Oxford Film Festival’s official website.