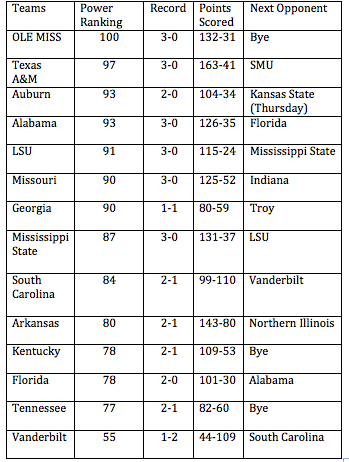 Ole Miss is clearly the “best team” in the SEC at this point in the season projected to go 11-1.
Why? The answers are obvious. Bo Wallace has established himself as the top QB in the league. I have never seen him ‘more composed’ than he was against LA. He is definitely hitting on all cylinders. The Ole Miss defense may be the best in the nation, bar none!
With three more takeaways this past week, the offense is getting the ball more frequently and with better field position. The receivers and offensive line are showing up each week. Having said the above, the Ole Miss coaching staff is the “real deal.” These guys make adjustments as needed and are as good as it gets in college football. And they are all here in Oxford. Hugh Freeze has established himself among the elite of college coaches!


As for the rest of the league, Georgia appears clearly overrated from preseason. Their defense is not up to par with the big boys of the west. As of right now, Missouri seems to be the “beast of the east”. The west is very much up for grabs with the winner of the Ole Miss-Alabama game in three weeks assuming the favorite’s role.
Either LSU or MSU will disappear after this week. The Thursday night matchup between Auburn and Kansas State should capture the attention of all SEC fans as the Tigers are still a force to be reckoned with. Texas A&M is the wildcard.
In conclusion, the October contest between the Rebels and Tide could break all attendance records for Oxford. This is shaping up to be the biggest game here since Maryland arrived in the 1950’s. There is still Memphis waiting in between who cannot be overlooked! Florida struggled with Kentucky this past week with Bama on their radar sights. The Rebels just need to keep on keepin on. When our opponents roll into town, it’s not just our team they have to compete against, it’s 60,000 screaming believers. It’s TIME!

Steve Vassallo is a HottyToddy.com contributor. Steve writes on Ole Miss athletics, Oxford business, politics and other subjects. He is an Ole Miss grad and former radio announcer for the basketball team. In addition, he is a certified economic and community developer and currently, a highly successful leader in the real estate business with Premier Properties of Oxford. Steve’s lifelong dream has been to live in Oxford full-time. “I am now living my dream daily as is my wife Rosie, who works with the Oxford Chamber of Commerce,” Steve said. You can contact Steve at sovassallo@gmail.com or call him at 985-852-7745.
Facebook
Twitter
Pinterest
Previous articleGreek Seniors Remember Rush Week
Next articleMitchell: My First Grove Experience