At 340 pounds, Trency Bynum decided to lose weight. So he walked it off. Thirteen miles a day.

CHARLESTON, Miss. — Three miles in the morning. Eight miles at night. Sauntering through 85 degree heat, weighed down by baggy sweatpants and an Adidas hoodie. This was Trency Bynum’s idea of how to get in shape. Step after grueling step, Bynum walked his way between Charleston and Oakland. Working his way up to 13 miles, Bynum walked right into first place in Charleston’s Talahatchie Health and Wellness Challenge.

Born and raised in Charleston, Bynum grew up surrounded by two things: family and food. “With my mother and father, I’ve always been a Christian,” Bynum said. “Growing up, I’d never been in trouble, never smoked or drank. Always been a family guy.”

Like many in the Delta, Bynum was a big eater almost from birth. “My mom always said, ‘Eat what you can,” and we did…I’d eat 10 out of 13 pieces of fried chicken. … It was hard to resist it. If you’re raised on that kind of food, it’s hard to change.” So hard that nearly 40 percent of Tallahatchie County’s population is either obese or overweight.

Still, with such strong roots in this small town, Bynum doesn’t know of anyplace else he’d rather live. In fact, strong support from his family encouraged him to get involved in Charleston’s Wellness Challenge, an event that changed his life.

The fight to cut back was a drastic change from the way he grew up. “I didn’t know it was bad. Most people just eat fast food and go,” he shrugged. “But the seminars (at the Wellness Challenge) taught me to stay under 1500 calories a day, no Diet Cokes, more exercise.”

Even now, he sees his old habits in children of Charleston.

“The kids, you can’t help them,” he smiles with a shake of the head. “Those children come in here and run straight to the refrigerator.”

Lounging in a worn recliner in the living room of his cozy home, crowded with wooden furniture and snug sofas, Bynum still has on his dust-colored jumpsuit from his job as a machine operator at Traxit North America, LLC, in Clarksdale. He says that the Wellness Challenge was not his first attempt at weight loss. He recalls another at his previous job, when he and a co-worker decided to see who could lose more weight, introducing Bynum to the idea that if he put enough work and effort into it, he could win.

Perhaps because he had been through this before, Bynum didn’t really feel the need to exert himself when the Wellness Challenge began.

“The first week, I didn’t really try,” he said. At first, he just cut his portions at the table.

“Then I’d see everybody else trying, and so that helped motivate me more to push harder.”

As he amped up his efforts and drove himself, Bynum found that the contest was more challenging that he thought it would be.

“Woo, Jesus! Man! Once I started to push harder, I pushed myself to the limit,” said Bynum. “I just started walking every evening when I’d get off work.”

The more he walked, the more determined Bynum became. He walked so much that he had to take medication for the aching pain that moaned through his feet.

Despite the pain, Bynum kept moving forward, step by step. As time passed, he grew to understand that the strength of the mind is far more effective than physical ability, a tool that he used to set his eyes on the prize.

“I stayed on my feet a lot,” he said, “but the key thing to losing weight, and people don’t believe it, but it’s your mind. You’ve got to set your mind to what you really want to do.”

So Bynum willed himself to consume more water and to eliminate sweets.

Considering how much meat, salt and sugar go into Southern cooking, taking on a healthier diet and lifestyle might have been nearly impossible on his own. However, Bynum found himself surrounded by encouragement, inspired by the strength of the community and motivated to encourage others in turn.

“What I learned a lot is that everybody started coming together,” he said. “At the end, everybody becomes friends. Because, at first, it was like a competition, but everybody comes together as friends. I encouraged a lot of people.” 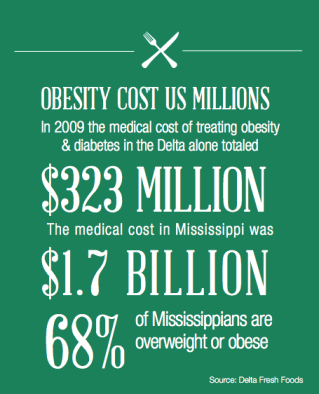 What surprised Bynum more than anything, though, was that out of 170 participants, he took first place.

“I was surprised that I was the winner,” he said. “It made me feel very good, like my hard work paid off.”

For losing a grand total of 48 pounds, or 15.2 percent of his body weight, Bynum received $1,000 and an overnight stay with a spa package at the Alluvian Hotel in Greenwood. He also took home $50 for winning the 5K race held the day of the Gateway to the Delta Festival, the same day the Wellness Challenge results were announced.

Bynum has yet to spend an evening at the Alluvian, but he knew right away what to do with the money, starting with his ’06 GMC Sierra.

“Man, when that money came, I went straight over and paid off my truck,” Bynum said.

Today, at 6’4” and 285 pounds, Bynum, 41, strives to stay active and maintain his diet, for both his own benefit and those around him. With three young grandchildren, it’s important to him to be able to play in the yard with them.

Because he won the Wellness Challenge, Bynum is ineligible to participate again, but that won’t stop him from getting out there anyway.

“I’m going to get back there,” he said. “If they won’t let me in it, I’m going to get in and just encourage others. Even though we were competing against each other, everybody becomes friends. I’d grab their arms and say, ‘you can do it, come on.’ If I go out there and they’re fixin’ to leave, I go out with them and say let’s do it one more time. Just encourage one another.”

Now that he knows he can lead others by his example, Bynum is constantly on his guard to be a good role model.

“You never know who watches you,” he said.

Sometimes it’s hard. But Bynum has learned that obstacles can be overcome. All it takes is that first step.

Story and photos by Lauren McMillin, Deeper South Magazine, The Land of Plenty