November 24, 2017
1
268
Former Ole Miss track star and pole vaulting world champion Sam Kendricks was voted USA Track & Field’s top male athlete for 2017, according to national media reports.
Kendricks, an Oxford High School graduate and 2016 Olympic bronze medalist, received the Jesse Owens Award as the men’s winner. He went undefeated with a 17-0 record in the pole vault this season.
The winners were chosen by the media and fans.
Emma Coburn won the woman’s title after becoming the first American woman to win a gold medal in steeplechase at the 2017 IAAF World Championships with a time of 9:02.58. 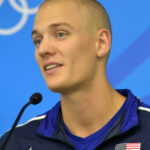 Kendricks, meanwhile, won every competition he entered, including the USATF Outdoor Championships, where he set a world record in the 6.0 meter jump, and the World Championships.
During his tenure at Ole Miss, Kendricks won the 2013 and 2014 NCAA Championships and broke both Ole Miss pole vault records in his freshman year.