Those people who think that a person can’t be tough and gentle at the same time just haven’t met or heard about Robert Khayat.

Those people who think winning is about humiliating your adversary haven’t watched or read about Robert Khayat.

He has often been described as the right person at the right place at the right time because of his  leadership at the University of Mississippi.  But his memoir, The Education of a Lifetime makes abundantly clear that Khayat would be the right person at the right place at ANY time.  The book, however, is not an exercise in self-aggrandizement; rather, it is an engaging and often entertaining chronicle of Khayat’s life from early days, through college, into pro football, and back to the Ole Miss law faculty then to his courageous (my word, not his) tenure as Chancellor of the University.  I highly recommend this inspiring book to anyone who aspires to a leadership position of any kind. 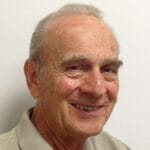 James A. Autry, a former Fortune 500 executive, is an author, poet, and consultant whose work has had significant influence on leadership thinking. He is the author of ten books, and his writings have appeared in numerous anthologies and magazines. He serves on the national advisory board of Poets & Writers, Inc. Autry resides in Des Moines, Iowa, with his wife, Sally Pederson, who recently retired as Lieutenant Governor of Iowa.