Did the Square have 2 way traffic, part one: The end of The Sound and the Fury Says Yes 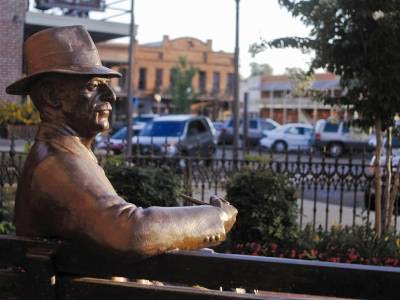 By: Tom Freeland, HottyToddy.com, Blogger
In the end of  The Sound and the Fury, Faulkner describes two-way traffic on the Square.  There’s a huge debate occurring on Facebook about whether the Square ever had 2 way traffic.  As I noted, if it did not, the ending of The Sound and the Fury makes no sense.
To set this up:  Luster, a young black family servant, was getting to drive a wagon onto the Square.  The horse Queenie was pulling the wagon, and riding as a passenger was Benjy Compson, who is commonly described as retarded, and who seems to me clearly autistic.  Things like his demands for order are a part of that, and descriptions of the child who was the basis for Benjy reinforce my conviction that he’s autistic.
They are headed up what would be South Lamar  toward the Square; at a hardware store on the Square (which has to be about where Met’s Hardware was, now Hinton and Hinton’s men’s shop), Benjy’s brother Jason works.  Jason is one of the great jerks in literature, the villain of the book, and totally put-upon by dealing with his various relatives.
Luster has the option of turning either way on the Square, but picks the way that outrages Benjy’s sense of order.  Starting as they leave the Compson house:

“Hum up dar!” Luster said.  He flapped the lines again.  With subterranean rumblings Queenie jogged slowly up the drive and turned into the street, where Luster exhorted her into a gait resembling a prolonged and suspended fall in a forward direction.
Ben quit whimpering.  He sat in the middle of the seat, holding the repaired flower upright in his fist, his eyes serene and ineffable.  Directly before him Luster’s bullet head turned backward continually until the house pulled from view, then he pulled to the side of the street and while Ben watched him he descended and broke a switch from the hedge.  Queenie lowered her head and fell to cropping the grass until Luster mounted and hauled her head up and harried her head up and harried her into motion again, then he squared his elbows and with the switch and the reins held high he assumed a swaggering attitude out of all proportion with the sedate clopping of Queenie’s hooves and the organlike basso of her internal accompaniment.  Motors passed them, and pedestrians; once a group of half grown negroes;
“Dar Luster. Whar you gwine, Luster? To de boneyard?”
“Hi,” Luster said, “Aint de same boneyard y’all headed fer. Hum up, elefump.”
They approached the square, where the Confederate soldier gazed with  empty eyes beneath his marble hand into wind and weather.  Luster took still another notch in himself and gave the impervious Queenie a cut with the switch, casting his glance about the square.  ”Dar’s Mr Jason’s car,” he said then he spied another group of negroes.  ”Les show them niggers how quality does, Benjy,” he said, “Whut you say?”  He looked back.  Ben sat, holding the flower in his fist, his gaze empty and untroubled.  Luster hit Queenie again and swung her to the left at the monument.
For an instant Ben sat in utter hiatus.  Then he bellowed.  Bellow upon bellow, his voice mounted, with scarce interval for breath.  There was more the astonishment in it, it was horror; shock; agony eyeless, tongueless; just sound, and Luster’s eyes back-rolling for a white instance.  ”Gret God,” he said, “Hush! Hush! Gret God!”  He whirled against and struck Queenie with the switch.  It broke and he cast it away and with Ben’s voice mounting toward its unbelievable crescendo Luster caught up the end of the reins and leaned forward as Jason came jumping across the square and onto the step.
With a backhanded blow he hurled Luster aside and caught the reins and sawed Queenie about and doubled the reins back and slashed her across the hips.  He cut her again and again, into a plunging gallop, while Ben’s hoarse agony roared about them, and swung about to the right of the monument.  Then he struck Luster over the head with his fist.
“Dont you know any better than to take him to the left?” he said.  He reached back and struck Ben, breaking the flower stalk again.  ”Shut up!” he said, “Shut up!” He jerked Queenie back and jumped down.  ”Get to hell home with him.  If you ever cross that gate with him again, I’ll kill you!”
“Yes suh!” Luster said.  He took the reins and hit Queenie with the end of them.  ”Git up!  Git up, dar! Benjy, fer God’s sake!”
Benjy’s voice roared and roared.  Queenie moved again, her feat began to clop-clop steadily again, and at once Ben hushed.  Luster looked quickly back over his shoulder, then he drove on.  The broken flower drooped over Ben’s fist and his eyes were empty and blue and serene again as cornice and facade flowed smoothly once more from left to right, post and tree, window and doorway, and signboard, each in its ordered place.

In my opinion, one of the great closing lines in fiction.  And, if there was not two-way traffic on the Square, this really does not make sense.  Luster had the option of going either way, but took the one that offended Benjy’s sense of propriety.
Read more blog posts by Tom Freeland at his NMissCommentor blog page.